Kathryn J. Attwood has written multiple young adult collective biographies on women and war for the Chicago Review Press, and edited Code Name Pauline, the memoirs of WWII SOE agent Pearl Witherington. Her first book, Women Heroes of World War II, gets all the attention, but her fifth, Courageous Women of the Vietnam War, was honored with an award that resembles the Newbery Medal if you don’t look too closely.

She has been seen on America: Facts vs. Fiction; heard on BBC America; published in the Historian and War, Literature & the Arts; and featured as a guest speaker at the Harold Washington Library in Chicago, the First Division Museum at Cantigny Park, and the Atlanta History Center. In addition to writing, she is part of the musical duo, The History Singers, who combine their passions for music and history in programs that use music to both entertain and educate.

Take it away, Kathryn! 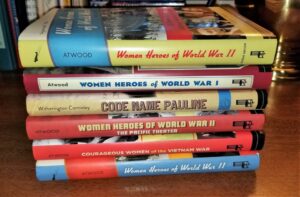 How do you choose which women to include in your books?

The easiest women to locate were those who were already famous prior to whichever war I was writing about at the time, or those who became so because of their war work. But what simultaneously fascinates and saddens me are the thousands of ordinary women who acted on their conviction and then disappeared post-war, their stories lost to history. To represent a few of them, at least, I searched through collective biographies, small publishers and indie book reviewing sites.

In addition to writing women’s history, you give  musical lecture programs that place classic American folk, pop, and war-related songs within their historical context.  (Which sound fascinating, by the way.) Is there any imaginative cross-over between your two projects? What can we learn when we use music as a historical source?

Some of my most precious childhood memories involve music: sitting at the piano with my dad as he taught me how to harmonize or singing second soprano with my mom in a small women’s church ensemble. I think the WWII generation must have been filled with music lovers, like my parents, or at least that’s the impression I got during the 2010s when my husband and I sang WWII songs for an organization called Pillars of Honor, run by some founding members of Honor Flight. The vets at these events would always sit in the front rows, most of them beaming and singing with us on every song: “We Did it Before and We Can Do it Again”, “I’ll be Seeing You”, “Praise the Lord and Pass the Ammunition”, “Any Bonds Today?”, “This is the Army Mr. Jones”, “I’ll Walk Alone,” “Don’t Sit Under the Apple Tree”, “It’s Been a Long, Long Time”, and the “Star Spangled Banner.”

Multiple radio stations use the tagline “The Soundtrack of our Lives” which is exactly what we try to accomplish when we present our programs: singing the soundtrack of people’s lives from different historical eras. In the case of the WWII vets, we were bringing them—and ourselves! –back to the days when they were saving the world from fascism. Heady stuff!

Fire Road: The Napalm Girl’s Journey through the Horrors of War to Faith, Forgiveness, and Peace by Kim Phuc Phan Thi. This memoir came out while I was turning in the manuscript for my Vietnam War collective biography, but Kim still took time away from promoting her book to write a glowing endorsement for mine. My chapter on Kim was based on the Denise Chong biography—it was too late to utilize the memoir at that point–but I recently suggested it for one of my book clubs and they all went wild over it. War stories have the potential to inspire because of the heroism they often illuminate, but war is always a destructive force that creates far too many victims. Kim’s story is, sadly, in this category, but the way she eventually triumphed makes her memoir a phenomenal inspiration. 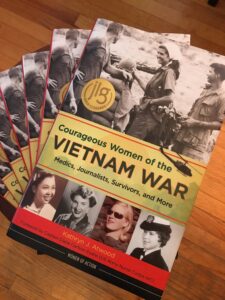 Question for Pamela: You’ve written many books but only the last two feature women’s history. What caused the switch? And do you have more women’s stories on the back (or front) burner?

You could argue that I returned to my first historical love when I wrote my book on Civil War nurses, Heroines of Mercy Street. As a child I read every book I could find about notable women in history, because we just didn’t show up in history as it was taught in the public school system. Even the big names like Joan of Arc or Queen Elizabeth I, were relegated to sidebars.

As those of you who have been reading History on the Margins for a while know, I have lots of historical interests. That said, for the foreseeable future, I will be writing about women in history. Because we were always there.

Interested in learning more about Kathryn Atwood and her work?