The women I interview for this series come to me from a lot of different sources. Some of them are people I know from writing and history groups.(Or Twitter. Don’t tell me that social media is a waste of time.) Some of them are friends of friends. I found Leslie Goddard on a list of programs sponsored by our bank. As soon as I read about the work she does portraying historical women, I tracked her down.

Leslie Goddard, Ph.D., is an award-winning actress and scholar who has been portraying famous women and presenting history lectures for more than ten years.

She holds a Ph.D. from Northwestern University specializing in U.S. history and American Studies as well as master’s degrees in both theater and museum studies. A former museum director, she is the author of two books on Chicago history and currently works full-time as a historical interpreter, author, and public speaker. 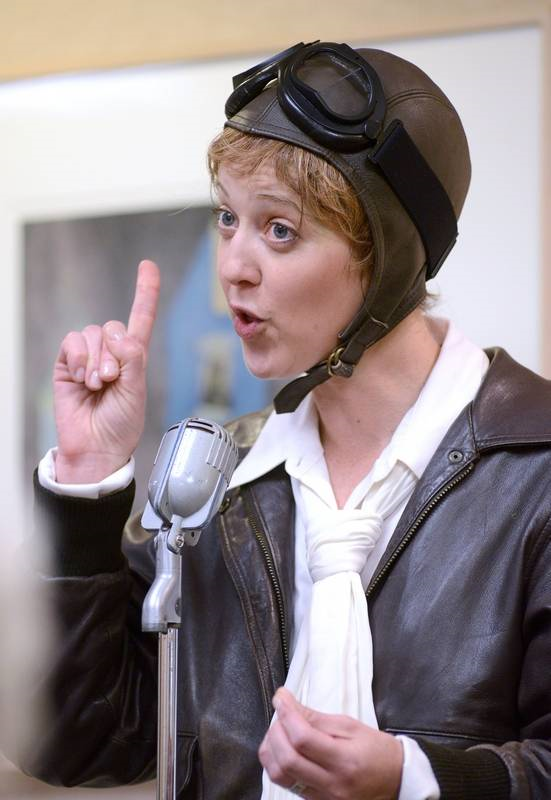 In her email to me, Leslie confessed that she had so much fun answering the questions that she got a little carried away.

Take it away, Leslie!

What inspired you to portray historical women?

My background is in theater. I did a lot of acting in high school and college, and my undergraduate and master’s degrees are in theater. But my career aim was to work in history museums, so I went on to get a Ph.D. in history and worked for abut 15 years in the museum work. One of my first jobs was at a local historical society, where someone found out I had a theater background and asked me to portray a famous local woman. That was the first portrayal I did, and it was fascinating to see how different it was from reading about a person in a book. So I created another portrayal, this time of Bertha Palmer, the Chicago socialite and philanthropist. And it was surprising how many groups wanted that kind of program. That’s what really set me on this unusual career path. Everyone I know who does historical portrayals gets into from a slightly different place. Some people start out as teachers or librarians or storytellers or actors.

How do you chose the women you portray?

There are a few criteria I use. First, it has to be someone whose story I find particularly compelling. If I have to live with someone in my head for a year – years, really – it has to be someone whose story is fascinating or unexpected or unusual or in some other way compelling. It doesn’t necessarily have to be someone who is a “hero”, but there has be some rich depth there. Second, because it takes about a year to put together a new program, there has to be enough interest out there among the general public to make the program popular. I’ve created some portrayals in the past of characters who I found fascinating – the temperance advocate Frances Willard, for example – but there just wasn’t enough demand to justify the work involved in researching, writing, rehearsing and memorizing a full-length program, so I’ve had to retire a few characters like her. I also like to have characters who reflect a broad range of historical eras and fields of expertise. The character I’ve done who is farthest back in time is the novelist Jane Austen. The character I’ve done who is closest to today is probably Jackie Kennedy. I have a scientist and author (Rachel Carson), an artist (Georgia O’Keeffe), a pilot (Amelia Earhart), a novelist (Louisa May Alcott), and so on.

Over the years, you’ve portrayed a number of different women.  Do you have a favorite, or two?

It sounds trite, but it really is like choosing your favorite child. I always choose characters whose stories are compelling to me, so they’re all fascinating in my view. That said, there are a few I particular like performing: Titanic Stewardess Violet Jessop (I just like the way that script turned out), Amelia Earhart (personal heroine of mine, plus the costume is much more comfortable than many), Eleanor Roosevelt (another personal heroine of mine, and her story has so many great inspirational sides to it).

For the most part you portray women who are not forgotten.  Are there particularly challenges in doing programs about  women who people think they know something about?

Absolutely. I do mostly portray women whose names are well-known, simply because I need to make sure there’s enough of an audience out there to make it worth the time and effort of creating a portrayal. In the past, I’ve had to retire some characters who just weren’t well-enough know even though I loved their stories. The silent movie star Mary Pickford, for example. But when it comes to so-called famous women, there are usually sides of them we don’t know as well. I was reluctant at first when someone asked me to portray Jackie Kennedy, in part because I don’t look very much like her, but also because I thought she was too well-known. But I was surprised. Jackie Kennedy is remembered mostly for her fashion, her youthful elegance and her warmth as a mother. Those are all true, but it means sometimes that means we overlook what a skillful and diplomatic political wife she also was. She gave campaign speeches in Spanish, she fought to preserve Lafayette Square, she brought the best in American performing arts to the White House and on and on. A lot of what we remember about the public image of the Kennedy years – the youth, the glamour, the focus on the arts, historic preservation – was largely due to her efforts.

Which of your programs is requested most often, and why do you think that is?

It really changes every year. Most often, it has to do with something that’s timely. In 2017, when the musical Hamilton opened in Chicago, my portrayal of Eliza Hamilton was really popular. In 2012, which was the 100th anniversary of the Titanic sinking, I did my Titanic stewardess portrayal a lot. Last year, I did 47 presentations of my Betty Crocker lecture, which was both new and timely since Betty Crocker turned 100 years old in 2021. The programs that consistently remain popular, year after year after year include my portrayal of Amelia Earhart, my lecture on Marshall Field’s, my portrayal of Eleanor Roosevelt, and my lecture on Chicago candy. I think some of that might be due to programs that just came together well, with scripts that flow and stories that move to a satisfying ending. But they are also topics that remain universally appealing and that’s probably the main reason.

Every woman is so different in terms of how much research materials is out there. Eleanor Roosevelt wrote something like 27 books and published a daily column six days for many years. She received 300,000 letters annually as First Lady. For her, it was difficult to winnow down a script to fit just an hour. Jackie Kennedy, on the other hand, never wrote an autobiography or kept a diary and she disliked interviews. The struggle there was how to get inside the head of someone who was so private. I like the challenge of finding primary source materials and then extracting from them a story that fits together cohesively and reveals something about a person.

We sometimes forget how recently Women’s History month became a thing. It was only established on a national level in 1987. When I was growing up, in the 1970s, there was almost no women’s history in my school. I remember one children’s book about a woman – Helen Keller – and that was pretty much it. My high school American history textbook was mostly about politics and wars – two areas where women historically have been relegated to a minor role. One book devoted two paragraphs to the entire women’s suffrage campaign – a campaign that ended with the doubling of the American electorate, the largest single increase in American history. Things are much improved today but there is still a need to call attention to the often-overlooked contributions women have made to U.S. history. Part of the reason I do women’s history is because there is so much for us to gain as a society when we remember women’s contributions. Acknowledging the contributions women have made in so many areas – peace, social progress, equality – it’s the best way we can encourage and inspire women today to participate in society, to work towards peace, social progress and the whole full flowering of human rights and human freedoms. That sounds awfully lofty, perhaps, but to me, it’s absolutely true.

I’ve always thought of the “great people” in history as being somehow extraordinary in ways ordinary people could never emulate. But when you really look at life stories, most people are far more similar to each other than they are different. Yes, women like Eleanor and Jackie came from socially and economically prominent family, but they shared the same emotions everyone else did. Eleanor struggled with shyness as a debutante and self-doubt as a mother. Her first reaction at the news of FDR’s election in 1932 was to burst into tears. Jackie Kennedy worried she was a “dud” as a politician’s wife. Yet these ordinary people went on to do extraordinary things. It’s the fact that they share the same emotions as everyone else that makes their stories so amazingly compelling. 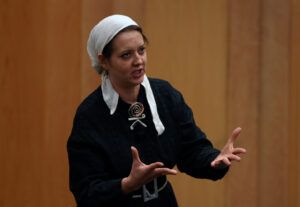 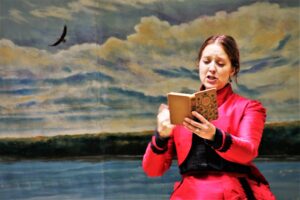 Question: What was your best-performing blog topic and why?

Here’s where I make an embarrassing confession: I don’t track stats on my blog. Every now and then I check how many people I’m reaching in total. Otherwise, I let it go. I realize that this runs counter to much advice about “best practices”. But I decided it was more important to think about individual readers and building real relationships. I love the fact that readers send me emails with comments on posts, ideas for posts, or just links to things they think I might find interesting.

That said, I think these Women’s History Month interviews are some of the most popular posts I run. Every year I hear from people who hope I will do it again. Music to a writer’s ear!

Interested in learning more about Leslie Goddard and her work?

Come back tomorrow for three questions and an answer with historian Nancy Rubin Stuart, whose most recent book examines the (many) women in Ben Franklin’s life.