Bridget Quinn is author of the award-winning Broad Strokes: 15 Women Who Made Art and Made History (in That Order), an Amazon pick for Best Art & Photography Books 2017 and a 2018 Amelia Bloomer List selection of recommended feminist literature from the American Library Association. NPR’s Susan Stamberg calls it “a terrific essay collection” with “spunky attitudinal, SMART writing.” In 2020, Quinn published She Votes: How U.S. Women Won Suffrage, and What Happened Next, an Amazon Editors’ pick in Best History books. Published to coincide with the one hundred year anniversary of ratification of the Nineteenth Amendment, She Votes features illustrations by one hundred contemporary women artists. Her next book will have a short subtitle (she hopes).

Take it away, Bridget! 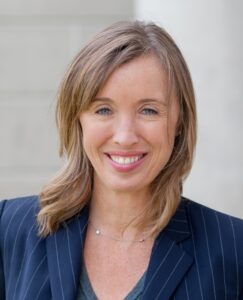 In both She Votes and Broad Strokes, you include profiles of the famous and the not-so famous.  How do you chose the women to include in your books?

The choice is partly a biographical one – that is, my own biography and what has called to me over time, for any variety of reasons – and partly an attempt to choose the right representative person/art/event to suit the book’s timeline and overall arc. It’s a bit sculptural in a way. How will the overall piece look and feel; what shape should it take? But mostly it’s about telling a story and doing it with honesty, fun and, I hope, flashes of wit, along with some anger.

Was a there a woman you were sad to leave out?

So many, far too many to name (ugh). But part of writing a book is shaping a narrative, honing, cutting, forming, and that inevitably means you leave more out than you put in. But in particular, for Broad Strokes I decided not to write about Swedish mystic Hilma af Klint, who was on my original list, because I feared she was too much my personal obsession. Then a year after the book came out, the Guggenheim held a show of af Klint’s work that was the most attended exhibition in the museum’s history. So, totally wrong choice on my part! I also originally wrote about Agnes Martin for Broad Strokes and in the end image rights restrictions made it impossible to include her. And I’d wanted to include Maya Lin (land art), and Barbara Kruger or Jenny Holzer (text), but I’d backloaded the story and didn’t have enough room for many contemporary artists. In addition, living artists entail many more rights issues than the other kind, so Broad Strokes leans into history more than contemporary. Finally, we wanted to stick with just a handful of artists – mirroring H. W. Janson’s The History of Art – which when it did include women artists (after several editions) in “The” history of art came up with just sixteen across some 800 pages.

For She Votes, it was even more difficult to choose since it’s all fairly recent history and there are so many amazing stories, women, etc. and we know quite a lot about them. I wish I’d been able to feature San Francisco activist Tye Leung Schulze, who was the first Chinese-American woman to cast a vote, and who worked to free Chinese women from being sex trafficked on the West Coast. And Zitkala-Sa (also called Gertrude Simmons Bonnin), a writer, musician and Dakota activist who embodied so much that I admire in a person: art and ability married to unshakable conviction.

Because you write collective biographies, you’ve written about lots of different women.  Do you have a favorite, or two?

I do. Right now I’m working on the biography of French eighteenth-century portraitist Adélaïde Labille-Guiard, who has haunted my life and work since I first encountered her in graduate school in my early twenties. She’s a significant reason why I became a writer. Adélaïde is Chapter 3 in Broad Strokes and now the subject of book number three. In She Votes I finally found a way to write for a broad audience about the Fort Shaw women’s basketball team, a group of native women in Montana who became the first World Champions of basketball in 1904. I grew up near Fort Shaw and my brothers hunted with some of the descendants of those players, so I knew their story for a long time and it was a thrill to tell it in a book.

Last year you wrote an important essay for Hyperallergic titled “What Should We Call the Great Women Artists?” I was already fascinated by, and struggling with, the question of how biographers chose to name their subjects, particularly when writing about women.  Your article clarified my thinking, while at the same time making it clear that the question of historical women’s names is complicated.  Where do you come down on the first name/last name question, absent any complicating factors?

How to put this? There is no “winning” when it comes to women’s names. I personally prefer to use first names for the reasons I give in the essay: Women are born with one name surname (their father’s name, usually) and if they marry it changes (historically, to her husband’s name). Besides the obvious problematic patriarchal implications, it means that in writing about women we’re referring to them by different names at different points in their lives. It also means women’s lives are sometimes lost due to losing the thread of who they are, especially if a woman remarries or if her husband or father has an “important” name himself. Many women artists, for example, have had their work tucked into the oeuvres of male relations. But on the other hand, using first names implies – so it seems – a lack of seriousness, both on the part of the author and for the subject. A reminder, though, that the “greats” of the Renaissance (and Ninja Turtles) are known by their first names: Raphael, Leonardo, Donatello, Michelangelo. We don’t think it unserious to call those men by their first names (nor Dante, Napoleon, Rembrandt, etc.). So there is something about women’s names themselves that are found unserious, and maybe we need to examine that.

I am quite literally obsessed with Diane Johnson’s recently reissued (well, 2020, but pandemic time is its own thing), The First Mrs. Meredith and Other Lesser Lives, first published in 1972. Johnson unapologetically wields all her considerable novel-writing power in reviving the real reputation of Mary Ellen Peacock Meredith. It opens with ghosts. Enough said. This past year I’ve loved Flower Diary: In Which Mary Hiester Reid Paints, Travels, Marries & Opens a Door by the poet Molly Peacock, and A Ghost in the Throat by poet and essayist Doireann Ní Ghríofa. Biography, it seems, is well served by poets and novelists. I’ve taken notes.

Often the most challenging part is locating their stories in the first place. I sometimes feel a bit like a treasure hunter passing a metal detector over well-trodden fields, just going along, not sure what I’m looking for, when there’s a sudden ping! and I that’s where I want to tunnel down, see what’s there. Sometimes it’s not a lot, as women’s lives have not been taken terribly seriously and so their work and affects – whether paintings, letters, journals, etc. – and so not archived or saved in the same way as with many men. There’s also a double-edged sword in writing about historical women because they are so often figures “no one has heard of” and so drumming up interest in publishers and readers can be a challenge.

I’m not sure, but I grew up as one of nine children, six of whom were boys, in an Air Force town in Montana during the Cold War. In short, a lot of masculine energy, some of which I admired. Quite early on I see now that I was looking to women in history to find out how to become a different kind of woman than those I knew, who were mostly mothers of large families or nuns, admirable in their own right for sure, but it wasn’t what I could imagine for myself. But I couldn’t imagine much else either, because I didn’t know what it could be. History told me: anything.

It is still incredible to me how much you can find on the internet. When I was a graduate student in the late 80s/early 90s, it took months to assemble a bibliography, track down the books, take notes from them etc. When I began researching the book I’m writing now, it took a single afternoon to locate all the sources I used then.

She Votes is a wonderful combination of art and story, using illustrations from 100 women artists.  How deeply were you involved in choosing the artists and how did you weave the two forms together?

I wrote the text first and then most of the artists were found via the wonderful site Women Who Draw (womenwhodraw.com) and the pieces were commissioned directly. That places a lot of trust in artists, which I love. When I first saw the images laid out in a conference room at Chronicle Books I was blown away by their variety, exuberance and excellence. All that original art in one place is deeply thrilling. That it was all in response to something I wrote was incredible, almost unbelievable. It was one of the great experiences of my life for sure. 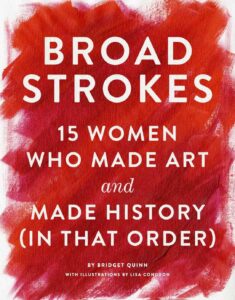 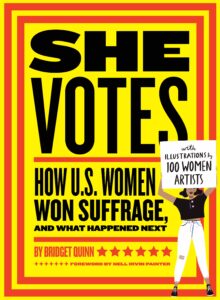 My question for you is a variation of one you asked me: Is there a woman warrior you want to write about, but haven’t yet? I’m all ears!

How to choose?  There are so many women warriors whose stories I didn’t get to tell. When I started writing the book, I had hundreds of examples; I ended with thousands. I was still finding new stories as I finished writing the book. In the four years since I’ve finished book,* I’ve learned about many more. Some of them have made their way to a blog post. But in many cases the information on them is so scanty that it’s hard to tell their story.

I had to make a hard decision about one story that didn’t make the book: Tamar the Great who ruled over the medieval kingdom of Georgia during its golden age at the end of the twelfth century CE. Tamar successfully held her throne against rebellious nobles and clergy after the death of her father—and against a play for the crown by her debauched first husband. She traveled with her troops. She appeared on the battlefield. I really wanted to write her story, putting it in counterpoint to her contemporary, the Empress Maud of England, who was not able to hold her throne in very similar circumstances. But there just weren’t enough sources in a language I could read that allowed me to establish to my satisfaction that she commanded her troops in battle.  I’m still sad when I think about it.

Interested in learning more about Bridget Quinn and her work?

Tomorrow it will be business as usual here on the Margins with a  blog post from me. But we’ve still got more people talking about women’s history from a lot of different angles next week. Don’t touch that dial!