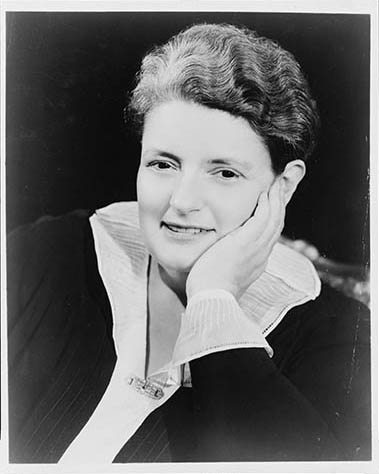 She started her journalism career as a part-time reporter for her hometown newspaper, the Paris Mercury, in Paris, Missouri, where she covered everything from baby contests to courthouse proceedings. Encouraged by her editor, she moved to Columbia, got a job at the paper there, and enrolled at the University of Missouri, where the first college of journalism in the United States opened in 1908.* She worked nights and went to school during the day, and graduated two years later with a journalism degree in 1918.

For the next twenty-five years, she moved from journalism job to journalism job. When jobs folded under her, as they did more than once, she worked as a freelancer, selling articles to national magazines like the Saturday Evening Post and Cosmopolitan and ghost-writing books in collaboration with others.

In 1934, she auditioned for a job on a women’s program on radio station WOR out of New York. WOR hired her to broadcast in the persona of a grandmother named Martha Deane . It wasn’t a good fit, but it was a job. After three weeks, unable to keep the details of her large fictional family straight, McBride gave up—on the air. She confessed to her listeners, “I’m not a grandmother! I’m not a mother. I’m not even married..The truth is I’m a reporter who would like to come here every day and tell you about places I go, people I meet. Write me if you’d like that. But I can’t be a grandmother anymore!”

Her honesty could have gotten her fired. But her listeners loved it, and wrote in to say so.

At the height of her career, between six and eight million people tuned in to what one of Sigrid Schultz’s friends described as “that chit-chat program of hers” even though she never announced ahead of time who her guests would be. Listeners knew that no matter who her guests were, McBride would make it interesting. She interviewed well-known public figures from politics, entertainment and the arts—including Eleanor Roosevelt, General Omar Bradley, and novelist Pearl Buck—using an unscripted, conversational style.

McBride celebrated her tenth anniversary on the air with a live broadcast from Madison Square Garden. Eighteen thousand people packed the auditorium to celebrate with her. Millions more listen from home. Ten year later, McBride “retired” from network broadcasting. She moved to the Catskills Mountains, where she broadcasted from her living room three days a week and wrote books. (That’s a vision of retirement I could get behind!)

*As a child growing up in Missouri, I was mightily confused by the fact that there was a school of journalism at the University of Missouri in Columbia and a Columbia School of Journalism** in New York.