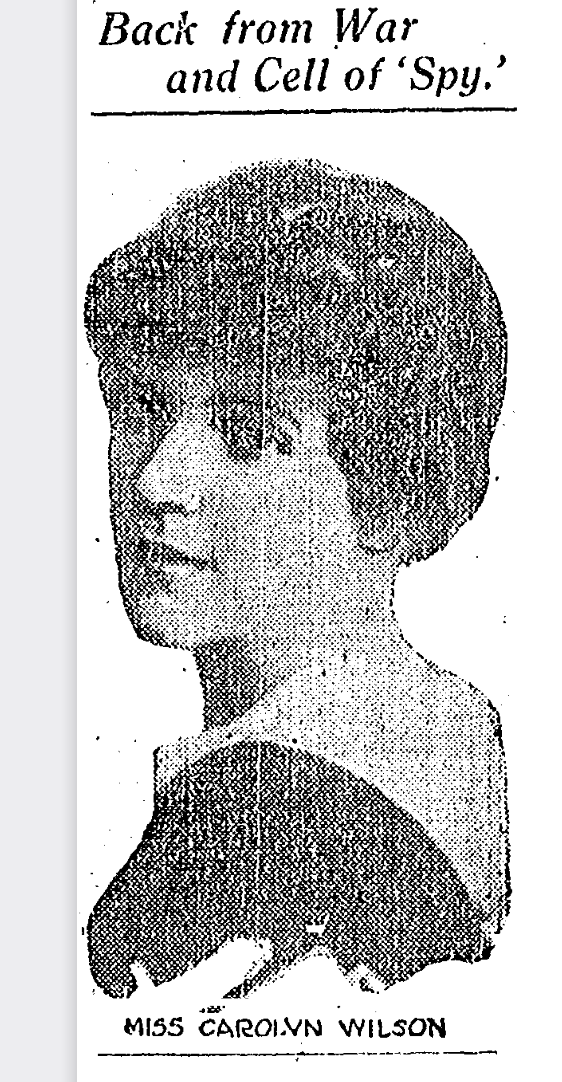 When I was writing Women Warriors I kept stumbling across women I’d never heard of.* I did not expect to have the same experience with women who served as foreign correspondents and/or war correspondents. After all, I’m writing about one particular woman, not a history about women journalists as a whole. And yet, women I’ve never heard about just keep popping up.

Case in point, Carolyn Wilson of the Chicago Tribune.

Like many of my contemporaries who went on to careers in journalism, Wilson was editor of her college newspaper. She graduated from Wellesley in 1910, spent a brief time studying in Germany, and then went to work for the Sunday section of the Tribune. She may have dreamed of reporting on hard news, but her first beat was a typical one for a young female journalist at the time, a chatty by-lined column titled”A Matinee Girl Sees Players; Clothes Worn on Chicago Stages” in which she wrote about actresses, their roles, and their clothes, on-stage and off.

Over the next two years, Wilson managed to score an occasional feature outside the women’s pages, including an interview with Orville Wright.** She had hoped to get a ride in the plane, but she had to settle for a discussion about the aviation stabilizer he was developing. He made it clear that he didn’t think she would understand what he was talking about, but she let her readers know that she was an aviation geek and had no problem keeping up: “not for nothing have I talked myself blue in the face at the Burgess hangar in Marblehead, and studied aerodynamics and. aeronautics with a zeal usually to be found only in boys.” She followed up the technical interview with a visit to the airplane factory. I am sorry to report that she ended the piece with a self-deprecating nod to her usual beat: “But do you want to know what tormented me all the way back to Chicago? I never had a chance to wear that adorable aeroplane cap.” Apparently she felt the need to soften the impact of her “boyish” zeal for airplanes.

In June, 1914, the Tribune sent Wilson to Paris, with a commission to “observe and record matters concerning the lighter side of life in that capital”. For the most part that meant society gossip and fashion news—a specialized form of foreign correspondence, though seldom recognized as such. She managed to push the boundaries of the form to include aviation: one of her early Paris columns centered on a technical discussion of the Sperry gyroscope, another airplane stabilizer, disguised as a frothy description of taking a plane ride with Sperry fils. (Airplanes were hot news in the first decades of the century well before Lindburgh made his famous flight across the Atlantic. In fact, I would argue that the high news value of aviation in general made Lindburgh’s flight possible. But that’s a discussion for another day.)

When the Great War began on July 28, 1914, Wilson added war correspondence to her job description.*** She filed her first piece about the war on August 1, a description of the war panic that gripped Paris; it appeared on August 11.

For the first few months of the war, Wilson continued to write her illustrated fashion column, titled “Smartest Styles at Common Sense Prices,” alongside pieces that looked at the war through what newspaper publishers called “the woman’s angle”: women taking on the jobs of men as they leave for the front, women knitting for soldiers, women volunteering as nurses. But by September she had broadened her scope. In addition to “the woman’s angle,” she wrote human interest pieces dealing with soldiers, reported stories from both sides of the front,**** interviewed soldiers, and produced thoughtful political analyses. She was even arrested in Genoa on suspicion of being a spy and held for several days until the British ambassador intervened on her behalf—an event she described as fulfilling a life-long ambition

The last article I can find by Wilson dates from November, 1918, when she clearly was working as a foreign correspondent, not a fashion writer. I don’t know what she did after the war. I do know that she left a legacy at Wellesley, where she endowed a lecture series intended to introduce students to the important issues and figures of the day. Today the Wilson lecture continues to host impressive guests.

*I still am. Apparently the supply of women who fought or led troops is limitless.

**For any airplane buffs among my readers—and I know I have at least one—the interview appears on January 18 1914, p. E4

***Nothing I have found so far tells me whether the Tribune asked her to do this or whether she just grabbed the opportunity and ran with it. Either is possible. The Tribune’s owner and publisher, Robert McCormick was certainly not one to waste the opportunity for some “woman on the spot”coverage.

****She claimed the Germans were more welcoming to reporters than the Allies.