Once she learned that we were interested in history, the young woman at the information desk suggested strongly that we visit Black Hawk State Historic Site, just outside Rock Island, Illinois. She assured me that the park’s museum covered more than just the Black Hawk War, which we had already spent a great deal of time thinking about on our last trip along the Great River Road.** In fact, she patiently assured me of this several times because I could not quite believe it was true.

It turns out that she knew her stuff. From the history buff’s perspective, the site is a two-fer. 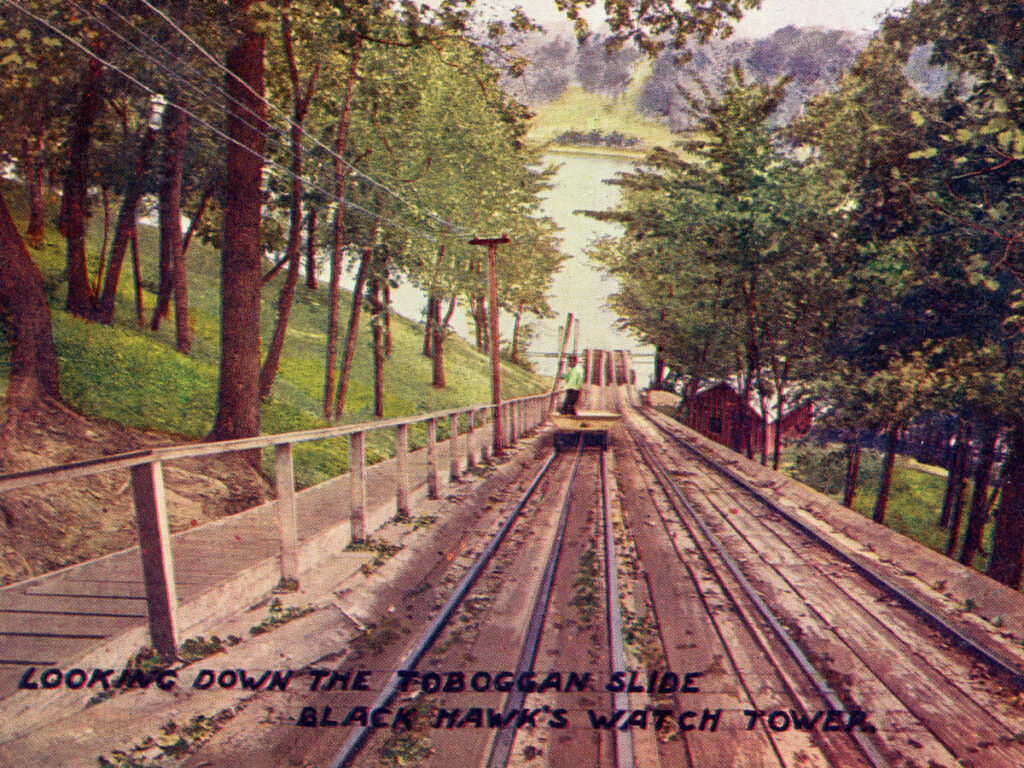 The park itself was the site of the Watch Tower Amusement Park, which operated from 1891 to 1925. Operated by the local street car company, the park was located at the end of the line. (Admission was free if you came on the streetcar.) The park had everything you would expect at amusement park, including a 1,000-seat amphitheater where traveling theater troupes of all kinds, from opera to vaudeville, performed. Thousands of people visited the park each day

The most popular ride was called “Chute the Shoots”: the prototype for the toboggan slide  rides that became popular in amusement parks across the country within a decade. Flat-bottomed boats ran on greased wooden tracks from the top of a steep bluff down to the Rock River, gathering speed along the way. (Up to 80 miles an hour according to one source.) When the boat near the bottom of the track, the ride’s operator released the boat from the tracks, which then skimmed over the water. The conductor would pole the boats back to the bottom of the Chutes, where they were hauled back up using electricity from the street car lines. Personally, I think it sounds terrifying. But then, the Tilt-a-Whirl is the wildest ride I’m willing to go on.

In 1925, the Tri-City Railway closed the park which had become too expensive to run. In 1927, the State of Illinois purchased the site, removed the rides and attractions, and created Black Hawk State Park. 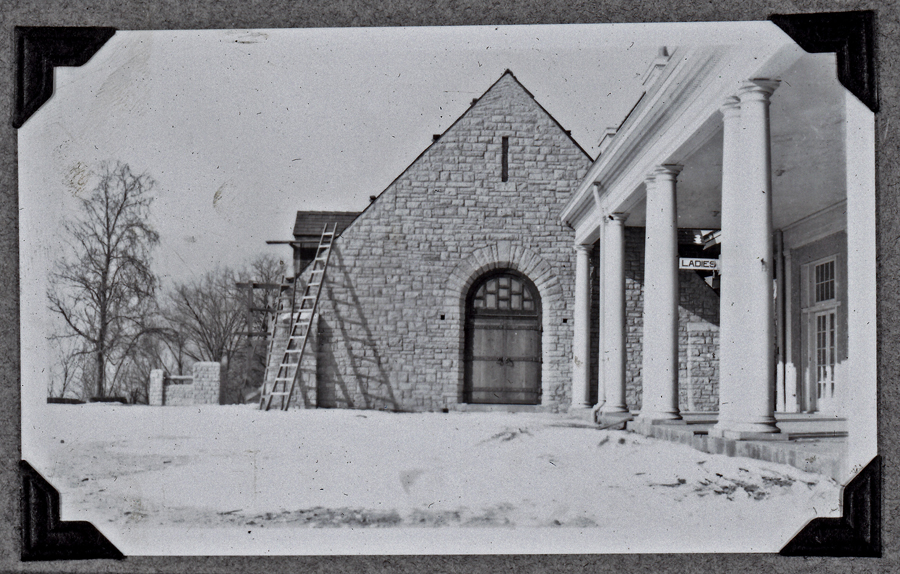 The amusement park was a lagniappe as far as we were concerned. We were there for the Hauberg Indian Museum, which is housed in a located in a massive stone and timber lodge built by the Civilian Conservation Corps.(Though in truth, we are always happy to wander around a CCC building. And this one is a stunner.)

The a small museum focuses on the Sauk and Meskwaki*** peoples. The first room tells the history of the two nations from the time they settled in the region in the mid-18th century through the Black Hawk war, which was the heart of the museum as far as I was concerned. The second room contains a set of four life-size dioramas depicting the live traditional lives of the two nations across four seasons—which I wasn’t particularly interested in—and photographs of some of Black Hawk’s descendents—which I found fascinating.

Here are the things that stuck with me abut the years before the Black Hawk War:

* For those of you who aren’t from the Midwest, and maybe for some of you who are, the Quad Cities are four small cities clustered around the banks of the Mississippi. Moline and Rock Island are in Illinois. Davenport and Bettendorf are in Iowa. (Personally, I always have trouble keeping them straight in my head.)

**Not enough time to be considered experts, but definitely more than a casual glance. (Are there Black Hawk War buffs?)

*** The French called them Reynards (Foxes), for reasons that I have not been able to discover, and they show up as the Fox people in many English language accounts. But that is not what they called themselves, and there is no reason we should continue the practice. You could call me Patsy, but it wouldn’t make it my name.

• If you put the official park address in your GPS, it will take you to the park office. The woman at the office made it clear that she was with the conservation police and knew nothing about the museum. She did, however, offer to issue me a fishing license. If you are at the site for history-buff reasons, you want to stop at the Watch Tower Lodge, which appears to be closed. Drive past the locked gates and follow the sign to the parking lot.
• Try the ice cream at Largomarcino, in Moline. They’ve been making their own ice cream in the basement since 1908 and it is fabulous.

Edited:  I now have the answer:  there is at least one Black Hawk War buff and he has written a guide not only to the sites and landmarks, but to first hand accounts.  http://benstrand.com/