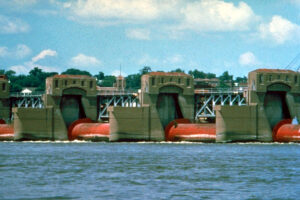 As so often happens on our road trips, our visit to the Mississippi River Visitor Center at Lock and Dam 15  on Arsenal Island turned out to be much more than we expected.

We went to the center expecting to see exhibits on the flora and fauna of this stage of the river, the general history of how the Corps of Engineers made (and keep) the Mississippi navigable, and the specific history of Lock and Dam 15.* At most, we hoped to see a boat go through the lock—eternally fascinating as far as we are concerned. (Though not quite as magical as watching a blacksmith at work.)

In fact, the vistors’ center had all of that, including what turned out to be a detailed topographical map of the area around the lock and dam on the first floor of the center, with a clever way to display the map’s scale. (Turns out I have a six-mile foot. Who knew?) 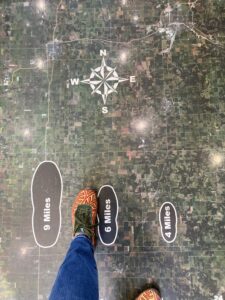 We would have been perfectly happy with all of the above. But when we walked in, the ranger on the desk asked “Are you here for the tour?” We were not. When she asked if we would like to join, we did not even have to confer with each other. The answer, obviously, was yes.

Once again, we had an enthusiastic and knowledgeable volunteer guide. He talked about how the lock and dam worked, the unusual bridge that links Arsenal Island to the Iowa side of the Mississippi and its predecessors, and the role Fort Armstrong played in the American Civil War. We got to see boats go through the lock, and a close up look at the bridge swinging open to accommodate the process. (We also got a close up look at water running over the dam, and the bright yellow  “last chance ropes” suspended from the bridge. Together they emphasized just how dangerous the dam is.)

Here are the bits that caught my imagination:

*Because every lock and dam on the river has its own story that begins with the river conditions at a certain spot.

For those of you who did not read the last post here on the Margins,# Arsenal Island is home to the Rock Island Arsenal and the district headquarters of the Army Corp of Engineers Since the Arsenal is an active military base, you need to get a pass to get to the welcome center. (Unless you have a military id.) Take the bridge from Moline—not the bridge from Davenport—and follow the signs to the Visitor Control Center. You will need a valid state id or U.S. Passport.

There are public tours of Lock and Dam 15 on Saturdays. However, you can schedule a tour at other times. The website says you need a group of ten or more people, but the tour we joined up with was originally a group of two.  You don’t know until you ask.

#Not pointing fingers. I realize you have many choices about things to read, on line and off, and I appreciate any time you choice to spend with me.