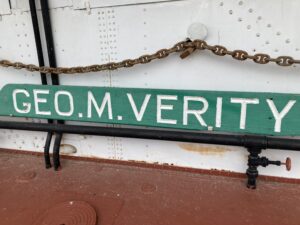 I will admit that I had my doubts about the George M. Verity Riverboat Museum in Keokuk Iowa. We have visited, and enjoyed, riverboat museums in the past and I didn’t expect that we would learn anything new about the boats and their relationship to the river. Besides, it was the end of the day and it looked like a storm was brewing over the river.

But if we have one rule of the road, it is that we leave no historical marker unread* and no museum unvisited.* (Okay, two rules.) So I huffed a little and changed my shoes for a pair that would be safer on a wet metal deck. And I am glad we did. It was fascinating. (We have that “no museum left behind” rule for a reason. You never can tell.) 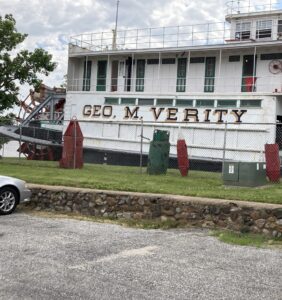 In 1927, the United States government built four new steamboats, including one then known as the S.S. Thorpe, to revive barge traffic on the Mississippi*** As the S.S. Thorpe, the boat moved barges between St Louis and St. Paul. In 1940, the boat was sold to Armco Steel and renamed after the company’s owner and founder, George M. Verity. (According to the tour guide, he liked to put this name on things.)

For the next twenty years, the boat plied the Ohio River, carrying coal from the mines in West Virginia to the steel mills in Cincinnati. But technology changed. In the 1950s, diesel replaced steel and the steamboats were scrapped. The Geroge M. Verity remained in operation until 1960, when the city of Keokuk bought it for a dollar.

While some of the material was familiar, the museum explored two topics that I had not seen before: the life of the crew on the boat and the workings of the steam engine. I was particularly taken with the explanations of how the steam engine worked not only to power the boat but to make life easier for the crew. (You might not find this as interesting as I did. I have a nerdy interest in steam boilers left over from the days when I managed old buildings with steam heat. But it was, honestly, very well done.)

Here are the bits that stayed with me:

If you are interested in how people live and work in small spaces, mechanical stuff, or riverboats in general, put this one on your list. (A word of advice if you poke around on the internet looking for more information about the boat or the museum: www.geomverity.org does NOT have the info you are looking for. Trust me on this.)

*Assuming we can find it.

**Assuming that it is open. One of the costs of taking a road trip with no particular schedule is that sometimes we miss the one day a week that a small museum is open.

****Having written this, it occurred to me that names for such errors probably exist in the context of medieval manuscripts. Which led me to wander off from the topic at hand for a moment or ten. Turns out there are technical names for entire categories within the larger universe of “scribal errors.” Two of my favorites: eyeskip, when the scribe missed an entire line, and dittography, when the scribe copied a section. Alas, my own scribal error above goes by the dull name of transposition. Perhaps I’ll stick with writo.