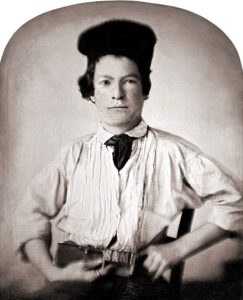 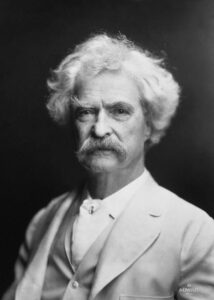 Unlike most of the places we’ve visited on our expeditions along the Great River Road, I had been to Hannibal, Missouri, before. But it had been a long time—decades in fact. When we drove into town on this trip, I carried two sharp memories—a recreation of the famous scene in which Tom Sawyer tricks other boys in whitewashing the fence and the thrill of seeing Mark Twain’s typewriter*—and a vague recollection of heat, dust, and shabbiness.

Although the town itself still is a bit shabby, the official Mark Twain interpretive center is not. The center uses a cluster of buildings related to Twain’s boyhood—or more accurately, to Samuel Clemens’ boyhood**—to tell the story of the man who became Mark Twain. (The museum’s emphasis on his boyhood is entirely appropriate. Clemens left Hannibal twenty years before he wrote Tom Sawyer.)

The museum uses names and imagery from Tom Sawyer to orient the visitor***—the Becky Thatcher house, for example—but the exhibits draw a clear distinction between Twain and his fictional alter-ego. While the exhibits are family-friendly, they take a close look at hard subjects, both within Twain’s life (his father’s death, his family’s fluctuating financial position, his apprenticeship as a printer’s assistant at the age of twelve) and in society as a whole (slavery, class differences, mortality rates). I was particularly taken with the exhibits in the “Huckleberry Finn” house, which looked at the life of the boy on whom Twain based the character, comparing the poverty in which he was raised with Twain’s romanticism about the boy’s freedom in Tom Sawyer. The exhibit did an excellent job of examining how Twain wove real-life details into the novel—always fascinating to a writer.

The only thing I was disappointed by was the way the interpretive center dealt with Mark Twain’s life after he became Mark Twain. His later life was complicated and in many ways unhappy. Instead of looking at that with the same clear-eyed focus they gave to his boyhood, they used the books as a chronology, with very  little information about the man. And while the books are the important thing when looking at any writer, I was not taken by the combination of life-sized dioramas, long quotations, and brief synopses that they used to discuss the books. On the other hand, they show a 90-minute video on Huckleberry Finn and its importance in American literature in an earlier part of the museum that was fabulous.

On the whole, well worth a visit.

*The only historical fact that I held on to from that visit was the fact that Twain was an early adopter of the typewriter. Neither that fact nor the typewriter itself were part of current Twain exhibits.

**I’ve chosen to refer to him as Twain for the rest of this post instead of flipping back and forth.

***As does Hannibal as a whole.