Last December, My Own True Love and I stopped in Saint Louis on our drive from Chicago to my hometown in the Missouri Ozarks. We spent two hours at the Gateway Arch. The museum at the base of the arch had been completely renovated since our last visit, thirteen years previously. I was delighted to see that the story of westward expansion had been, well, expanded. Women and people of color were explicitly included,* as was the United States’ agressive actions against Native Americans in general and against Mexico in the 1840s. The exhibit told the story of lost rights and imperial actions alongside stories of material progress, courage, and growth.

I talked about the changes in the way the National Park Service tells the story in some detail in a blog post about our visit. What I didn’t share in that post was the way the exhibits made me feel. By the end of that two hours, my head throbbed, my stomach hurt, and my heart ached. Holding the two stories side-by-side was painful. History is my passion. But over the last few years, I’ve also learned that history is hard. And I’ve come to believe that it should be. 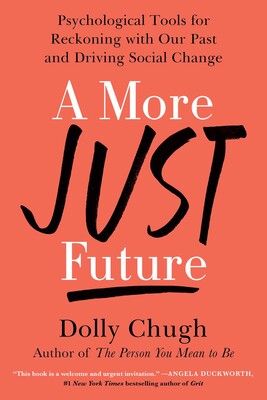 Which brings me to Dolly Chugh’s new book, A More Just Future: Psychological Tools for Reckoning with Our Past and Driving Social Change. Dolly deals directly, and brilliantly, with the discomfort increasing numbers of us are trying to come to turns with about the disjunction between the history we were taught and the history we weren’t taught. Her goal is to help us, and herself, “appreciate both the reality of our country’s mistakes and the grandeur of our country’s greatness”—a condition she defines as being a “gritty patriot”—and further, to understand the impact of our past on our present.

Dolly is a social psychologist, not a historian, so the focus of her book is not on the buried/forgotten/overlooked tales of our past,** though she uses some of those stories to illustrate her points. Instead she helps the reader understand why is it so difficult, emotionally and intellectually, to unlearn history—as individuals and as a country—and gives her (and by her, I mean me) tools for doing so.

A More Just Future is an important and wise look at confronting our whitewashed history and the emotional impact of doing so. It is also a delight to read. Trust me on this.

* A trend you’ve seen me applaud many times in these posts and in my newsletter over the last few years.
**Or more accurately, the stories left out of mainstream accounts of our collective history. 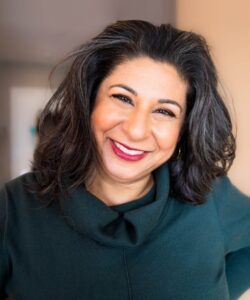 Just so you know: Dolly Chugh is a Harvard-educated, award-winning social psychologist at the NYU Stern School of Business, where she is a expert researcher in the psychology of good people. In 2018, she delivered the popular TED Talk “How to let go of being a “good” person—and become a better person.”  She is also the author of the acclaimed book The Person You Need to Be and the popular newsletter Dear Good People. [Both of which I strongly recommend.]

You can find out more at DollyChugh.com.