I have a whole list of future blog posts to share with you, but today my head is in 1933.  Hitler has just become chancellor and things are getting ready to get bad fast.  As part of my work on this chapter, I pulled out my notebook from our 2019 trip to Nuremberg–which feels like it happened a lifetime ago. I wanted to review my notes from Nuremberg’s amazing tough-minded museum about the rise of the Nazis. From notebook to blog post was one quick step into the past.  I thought some of you might find it interesting as well. 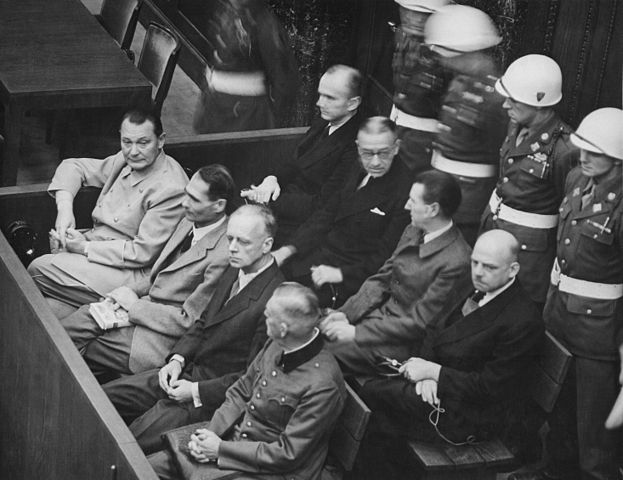 One of the most impressive things about Nuremberg is the way the city looks directly at its Nazi past, and encourages visitors to do the same. Nowhere is that more evident than in two major museums: the Documentation Center-Nazi Party Rally Grounds and the Nuremberg Trial Memorial.

The Documentation Center, generally called the Doku-Centrum by the locals, is built in to the single remaining major building on the Nazi Party Rally grounds: a labyrinthine concrete addition set on top of the uncompleted Congress Hall that is appropriately oppressive in style. The main exhibit, titled “Fascination and Terror” tells the story of the rise and fall of Nazi Germany from the Weimar Republic through the trials, with an emphasis on the party rallies held in Nuremberg and its symbolic role for the Nazis. (And consequently the city’s symbolic role for the trials.)

The Nuremberg Trial Memorial is located on the top floor of the Nuremberg Palace of Justice, which is a working courthouse. In fact, Courtroom 600, where the trials took place, is still a working courtroom—a fact that I found deeply moving, for reasons that I cannot articulate. (Perhaps simply because it means the room is not always open to visitors, and sitting in that room felt important.) The exhibit attempts to provide an objective account of the trial, complete with a discussion of the legal foundation for war crimes, explanations of the charges against the various men accused of war crimes, and biographies of the judges and prosecutors. (I found the amount of detail overwhelming at times, perhaps because we came directly from the Doku-Centrum.) The exhibit also looked at media coverage of the trials.

I won’t even try to give you a detailed overview of the museums, but these were a few of the things that stuck with me after the fact:

My Own True Love and I visited the two museums back-to-back in one day. I’m still torn as to whether that was a good choice. On the one hand, it squeezed all the pain into a single day and left us free to concentrate on other, more enjoyable things for the rest of the trip: gingerbread, medieval trade routes and artisans, pencils, and New Year’s Eve. On the other hand, we had to rush through the end of the Nuremberg Trial Memorial. And it made for a very long, very grim day that left me with a headache and the desire to wash away the images with a long shower and a strong drink. My final judgement: it wasn’t fun but it was important to do.
_____________________________________________________
Travel Tips

1. We were lazy and took a cab, but the Doku-Centrum is easy to reach by public transportation.

2. The Doku-Centrum has a surprisingly good cafe. And a good thing, too, since it is in the middle of nothing in particular.