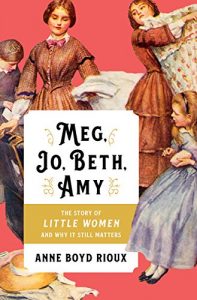 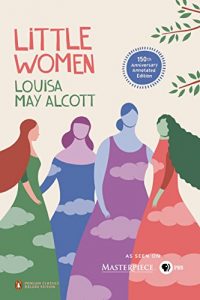 It’s the 150th anniversary of the publication of Louisa May Alcott’s Little Women and the legions of Alcott fans have plenty of ways to celebrate.  PBS released an adaptation in May and at lease one new feature film adaptation is in the works.(1) A graphic novel that re-envisions the March sisters as a blended family leaving in modern New York City will be released in hardcopy in February. (The hard core have been able to watch it on-line in serial form beginning in March.) As the anniversary grew closer, articles about Alcott, Little Women, and related topics have appeared in all the major publications that consider things pop-cultural, literary, and historical.

Anne Boyd Rioux’s Meg, Jo, Beth , Amy: The Story of Little Women and Why It Still Matters is an important contribution to the conversation, and one that will last long after the current flutter of interest subsides. (2) Meg, Jo, Beth and Amy is not a biography of Alcott, though Rioux certainly tells Alcott’s story. It is instead a biography of Little Women itself. Rioux considers the changing audience for Little Women(3). She examines its many adaptations into other art forms. She describes the book’s cultural influence–including an amazing array of women who claim it as an influence. And, perhaps most importantly, she takes on the question of Little Women’s relevance today.

Discussing Mark Adamo’s opera based on Little Women, Rioux says “The story Adamo tells does exactly what an adaptation should do: it opens up the original text and makes you feel like you understand it even more deeply.” The same could be said of Rioux’s study. Meg, Jo, Beth, Amy is an engaging and enlightening piece of scholarship that led me straight to my copy of Little Women, eager to read it one more time.

(1) Maybe two. I’m seeing two different directors and two different time lines. The one with Meryl Streep as Aunt March looks interesting enough that I may break my long-standing ban on watching adaptations of Little Women.
(2) Rioux also edited a new annotated edition of Little Women for Penguin Classics. It’s a thing of beauty:  a good choice if you’ve read your childhood copy to flinders, or want to introduce someone to the book.
(3) Boys read it, too, when it first came out. And their lives were richer for it in my opinion.