Paige Bowers first caught my attention because she kept popping up as an interesting voice in the Twitter thread of a mutual friend.

Paige successfully straddles the world between journalism and history—a balancing act that is not as easy as she makes it look. A lifelong Francophile and history buff, she is the author of The General’s Niece: The Little Known de Gaulle Who Fought to Free Occupied France. She is also a a nationally published news and features writer whose work has appeared in TIME, USA Today, The Wall Street Journal, The New York Times, People, Allure, Thomson Reuters, Glamour, Pregnancy, AirTran Airways’ Go, The Atlanta Journal-Constitution, Atlanta Magazine and Palm Beach Illustrated.

Let’s welcome Paige to Three Questions and An Answer:

Geneviève De Gaulle was well known in France during her lifetime, but is less well known in the modern United States.  What led you to write about her life?
I fell down a rabbit hole. At some point in 2014, I came across a news article that said Geneviève De Gaulle would be reburied in the Panthéon, a grand mausoleum in Paris full of great French historical figures, most of them male. The government was honoring her in this way because she was a teenaged resistance heroine during World War II, who later went on to become a champion of women and the poor. For all that I had read in graduate school, I thought I had never come across her name and I wondered why. Turns out, I had come across her name and not realized it. Charles de Gaulle dedicated his war memoirs to his niece, and I breezed right past it as a grad student without stopping at that time to wonder who she was and why he dedicated his memoirs to her. After reading about her Panthéon induction, I set out to tell the story of this little-known de Gaulle, a bookish and incredibly brave young woman who risked her life to free Occupied France.

What’s the last book that blew you away?
There were so many wonderful books published in 2018, it’s hard for me to pick just one. But if I were forced to do it, I’d have to say Mary Gabriel’s NINTH STREET WOMEN took my breath away. It’s a fantastic group biography of Lee Krasner, Elaine de Kooning, Grace Hartigan, Joan Mitchell, and Helen Frankenthaler, five women who were audacious enough to not only enter, but make a mark in the male-dominated world of abstract painting. At the same time, it is an incisive political, social, and cultural history of the post-World War II period. Impeccably researched and beautifully written, it’s a master class on how great narrative nonfiction should be done. I can’t recommend it enough.

What’s your next book about and when will we see it?
My next book is about Raye Montague, the first person to design a Naval warship by computer. Now, it is no mean feat to make a computer do your bidding. But, that’s only part of why Raye’s story is so special. She grew up in the Jim Crow South, and throughout her life fought racial and gender prejudice so that she could accomplish her dream of becoming an engineer. She was a tough, tender, and brilliant woman with a tremendous sense of humor, and I can’t wait to introduce her to readers. The book is tentatively titled KICK LIKE THE DEVIL. It has no release date yet, but my manuscript deadline is this fall. So, stay tuned!

Here’s my question for you: You just wrote a book about women warriors. Have you started thinking about what your next book might be? If so, what is it?

I’m still at the poking around stage on several ideas. The only things I’m sure of is that it will probably be a work of women’s history, and it will include opinionated footnotes.  Like you say, stay tuned! 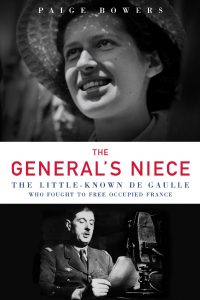 Come back on Monday for another Telling Women’s History Interview. I’ve got an entire month of some of my favorite history people talking about the work they do and how they do it.  Next up: Elizabeth de Wolfe, author of Shaking the Faith and The Murder of Mary Bean and Other Stories.