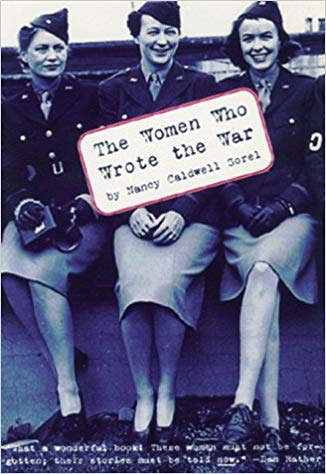 Women in the newspaper business had the same experience of women in other walks of life in World War II: vacancies filled by men who left for the front created opportunities for women. Women reporters made the leap from the society pages to to the front page. Women worked as copy editors and typesetters. Some ran presses. By 1943, newspaper staffs in smaller American cities were fifty percent female. And a small number of American women, less than a hundred total, found their way to the front as war correspondents.*

Before I picked up Nancy Caldwell Sorel’s The Women Who Wrote the War, I knew the names of precisely two female war correspondents who worked in World War II: photographer Margaret Bourke-White and journalist Martha Gellhorn.** And I didn’t know much about either of them.

Sorel tells the stories of the well-known and the obscure. She places them in the context of their female predecessors, and considers how their experiences in earlier wars trained them for World War II. (Martha Gellhorn wasn’t the only woman to report on the Spanish Civil War.) She looks at their lives as well as their reportage. She shows how they got around the barriers the army placed in their way: because they were barred from official press briefings until very late in the war they found and told stories of heroism and heartbreak outside the battlefield, creating a richer picture of the war as a whole for people back home. Some of them went on to report aftermath of the peace.

The Women Who Wrote the War is a delight to read. Obviously there’s more than one way to look at women and war.

*If you know of a book about the role played by women in the newspaper business outside the United States during the war, let me know.

**I learned about Gellhorn while reading Adam Hochschild’s excellent Spain in Our Hearts—which is about the Spanish Civil War, not World War II.