Tomorrow is Mother’s Day in the United States. It’s been packaged as a pastel holiday: all flowers and robins and lace and chocolate. In fact, for many people it’s a more complicated holiday than its commercial rendering would suggest. Many people greet the holiday with a sense of loss that is too new or too deep to allow celebration. Others are forced to face once again unresolved complicated relationships.  Me?  I’m one of the lucky ones. (*Waves* Hi, Mom!)

In celebration of Mother’s Day, with all its complications, ambiguities, and joy, I’d like to share the story of Tomyris, a woman warrior who proved that the strength of a mother’s rage when someone hurts her baby does not end when a child becomes an adult. 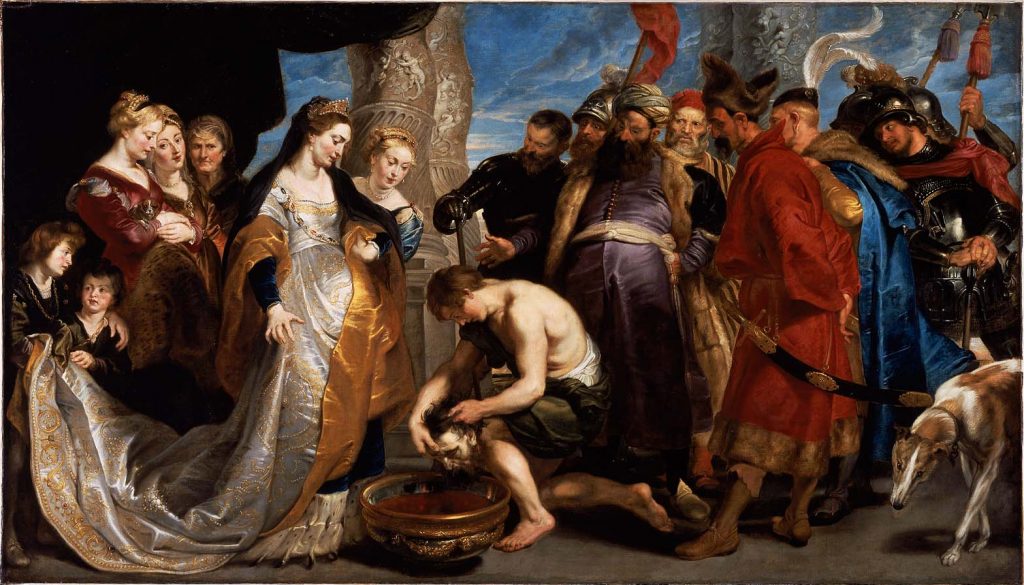 Rubens: The Head of Cyrus Brought to Queen Tomyris

According to the Greek historian Herodotus, Tomyris was the leader of the Massagetae, a confederation of hard-riding tribes who roamed the steppes of Scythia, the reported home of the legendary Amazons. Unlike women in many of the neighboring territories, Massagetae women fought on horseback alongside their men, held property in their own names, and enjoyed considerable sexual freedom. They also had a tradition of women rulers.

In 530 BCE, the Massagetae lands caught the eye of Cyrus the Great of Persia. Over the twenty years of his reign, Cyrus had built what was then the greatest land empire of all time. It stretched from the Caucasus to the Indian Ocean, from the Mediterranean Sea to the Indus River. He had defeated the Medes, conquered the fabulously wealthy King Croesus of Lydia, subjugated the Greek colonies of Ionia, and seized the city of Babylon, bringing an end to the great Chaldean empire. His obvious next move was northeast to the steppes of the Massagetae homeland.

Seeing that Tomyris ruled alone, Cyrus first tried to win her territories with an offer of marriage, a time-honored means of annexing a kingdom, especially in cultures in which women are seen as the property of their fathers or husbands. Tomyris knew Cyrus was courting her solely for her kingdom. She refused his proposal like the poisoned apple it was and demanded Cyrus leave her people in peace, saying, “rule your own people and try to bear the sight of me ruling mine.”

In response, Cyrus marched his troops toward the border between his empire and the Massagetae lands. When he reached the Araxes River, he ordered his men to build bridges across it. It was obvious he did not have peace in mind.

Tomyris offered to meet him one-on-one if he would abandon his bridge-building and his invasion plans. The Massagetae would retreat a three-days’ march from the bridge and allow Cyrus to cross for a meeting. If he preferred, Cyrus’s troops could retreat and Tomyris would come to him. Cyrus took the suggestion to his war council, where it was shouted down on the grounds that it would be “an intolerable disgrace for Cyrus, son of Cambyses, to give ground before a woman.” The presumably greater shame of defeat at the hands of a woman apparently never occurred to them as a possibility.

With the failure of Tomyris’s attempt at diplomacy, the two countries went to war. At first Tomyris fought only to defend her borders against the Persian invasion. Then her son Spargapises and the men under his command fell into a Persian trap.

Cyrus’s trap depended on one fact: the Massagetae, like other Scythian tribes, drank milk rather than wine.* He ordered an elaborate banquet laid out in his tents, complete with large quantities of wine. Then he faked a retreat, leaving some of his less skilled soldiers behind to “defend” the camp. The seemingly abandoned feast caught Spargapises and his troops as effectively as peanut butter in a mousetrap. The Massagetae ate and drank themselves into a stupor. When they were too drunk to be dangerous, the Persians returned. They massacred most of the Massagetae forces, taking Spargapises prisoner.

Spargapises may have been clueless about wine, but he understood power politics. He tricked Cyrus into removing his bonds, then killed himself so the Persian emperor could not use him as a bargaining chip against his mother.

With Spargapises’s death, the nature of the war changed. Tomyris was no longer interested in simply keeping the Persians at bay; she wanted vengeance. Tomyris sent Cyrus a message in which she denounced the Persian ruler as a coward and threatened him with revenge for the death of her son: “Glutton for blood! Your weapon was red wine, which you Persians drink until you are so crazy that shameful words float on the liquor’s fumes. This was the poison you used to destroy my army and my son, not in fair and open fight. Leave my land now, or I swear by the Sun I will give you more blood than you can drink, for all your gluttony.”

Cyrus did not back down.

Tomyris led the remainder of her army against the Persians in a battle so bloody that Herodotus, unable to imagine the scale of future atrocities, judged it “more violent than any other fought between foreign nations.” The Massagetae did not bother to take prisoners. Instead they killed everyone in their path, from hapless camp followers to Cyrus himself. When the battle ended, Tomyris and her soldiers searched through the dead until they found Cyrus’s corpse. Tomyris hacked off his head and plunged it into a wineskin filled with blood–reportedly drained from Persian soldiers–and proclaimed that her decapitated enemy could drink his fill. Thereafter she used the empty skull as a goblet.**

Cyrus’s death at Tomyris’ hands did not mark the end of the Persian Empire–or even stop its expansion. His successors continued Cyrus’s expansionist policies. But they left Tomyris and the Massagetae alone.

*Not as innocent as it sounds. I’m told fermented mare’s milk (koumis) packs a punch.

**This was not a piece of personal gruesomeness on Tomyris’s part. Scythian warriors traditionally made bejeweled goblets from their enemies’ skulls. For that matter, the Romantic poet Byron is said to have kept a skull goblet around, though it was not made from the remains of someone with whom he had been personally acquainted.