At this time last year, My Own True Love and I took a D-Day tour put on by the fabulous National World War II Museum in New Orleans. With the 75th anniversary of D-Day marching toward us, it seemed like a good time to re-run the blog posts I wrote about the trip.  Settle in:  for the next few posts it’s going to be D-Day in the Margins.

The issue first appeared when we stood on the grounds of William’s castle: a site which was forgotten by l’homme in the street in the twentieth century until bombing during the invasion of Normandy destroyed the medieval town that surrounded the fortified walls. The bombardment came up again when we visited William’s abbey, where many citizens of Caen took refuge during the bombardment.

The battle for Caen began on June 6, 1944. The city was “liberated” on July 8, but fighting around the city continued until July 21. The cost of liberation was high. Some three thousand civilians were killed in the battle for Caen. Seventy-three percent of the city was destroyed, leaving two million cubic meters of rubble that had to be removed before the city could begin to rebuild. For more than three years, the residents of Caen lived in temporary housing on the outskirts of the city while German prisoners of war moved rubble.* 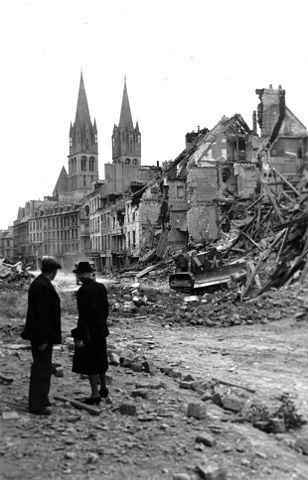 Reconstruction finally began in 1948, in many cases using the prized Caen limestone from destroyed buildings.

Moral of the story, at least as far as I am concerned: it is easy, and important, to remember D-Day from the perspective of the soldiers. Both the acts of heroism and the tragic loss of life. But we also need to remember the civilian casualties of war.

*Even decisions that seem obvious were complicated. On the one hand,  prisoners of war were used because the work was hard and dangerous: the rubble contained unexploded shells. On the other hand, the German prisoners were fed in exchange for their work at a time when many French civilians went hungry.

Reminder:  If you are reading this blog post as an email, you will need to click through to your browser to see the video.  Just click the blog header.