Quick: Name one historical woman pilot other than Amelia Earhart without resorting to the internet. (1) Aviation history is a regular topic in our household and I could only come up with three:

More accurately, I could only come up with three before I read Keith O’Brien’s excellent Fly Girls: How Five Daring Women Defied All Odds and Made Aviation History. 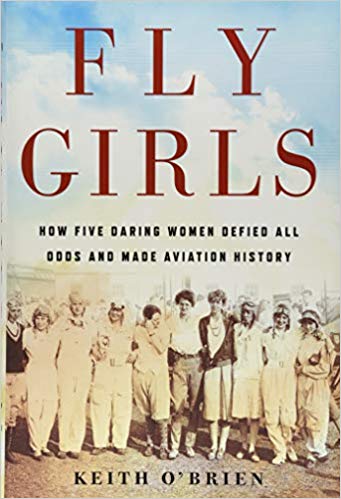 At first O’Brien seems like an unlikely author for a work of women’s history. He is a journalist with a history of writing (beautifully) about sports. His previous book, Outside Shot, is a basketball epic—think Hoosiers for the 21st century. In fact, I would argue that O’Brien’s history as a literary sportswriter makes Fly Girls the book it is. He tells the story of women’s struggles to gain acceptance in the world of early aviation through the lens of airplane racing, which was a popular spectator sport in the years between the wars.

Like modern day NASCAR racing, airplane races were about skill, speed, and the possibility of seeing horrifying crashes. And like boys’ clubs throughout history, the organizers of airplane races were determined to keep women out of the game. O’Brien tells the story of five women who learned to fly against all discouragement, who set out to break distance and speed records, and who were determined to fly in the big-money races with men. He details their challenges, their failures, and their successes. I’m not going to give you any details, because O’Brien tells their stories with the tension of a thriller and I don’t want to spoil the ride.

For me, Fly Girls was a visceral read. I ground my teeth at the indignities they suffered. I wept more than once at the story of a woman’s death. (4) I occasionally swore. And at least once I gave a fist bump of triumph. (That’s as close to a spoiler as I’m going to get.)

For the record, their names are:

As the most visible female pilots of their time, other women with dreams of flying watched their successes and failures with the same passion that thousands (millions?) are watching the US women’s soccer team play in the World Cup.  In fact, if you’ll excuse me,  the final game is about to start as I write this.  I’m not much of a sports fan, but this one matters.

(1) Or any aviation history books that may reside on your shelves. (Though if you have more than one or two this question may not present a challenge.) Bonus points if you’re familiar The 99s.

(2) She had to go to France to do it, because none of the aviation schools she approached would accept her. Which meant she had to learn French in order to learn to fly. This is known as determination.

(3) Also the first woman to break the sound barrier. But I didn’t know that until I looked up her dates.