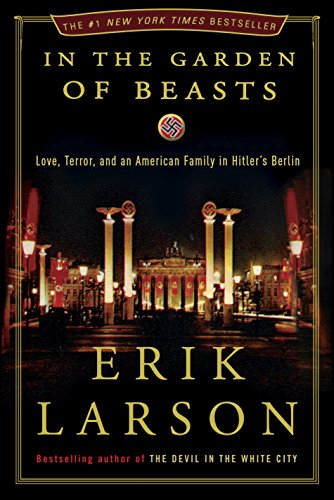 A few weeks ago I picked up Erik Larson’s In the Garden of the Beasts: Love, Terror and an American Family in Hitler’s Germany. Prior to that I suspect I was one of the few history buggs,(1) at least in the United States, who had never read a book by Larson. This was not a case of misplaced boycotting.(2) It was simply a case of not being the right book at the right time. There is a certain irony in this since Larson is one of my benchmarks of success in writing historical nonfiction for a non-academic audience. More than once I’ve started a sentence with “I’m no Erik Larson, but…”

In case any of you haven’t read In the Garden of the Beasts, here’s a quick review:

Larson looks at Germany’s descent into Nazi control through the eyes of America Ambassador William E. Dodd and his daughter Martha.(3)

Dodd was not an obvious choice for the position from the perspective of the career diplomats who surrounded him. A history professor from the University of Chicago (!!) nearing the end of his career, he was desperate to finish his major scholarly work and thought a nice little diplomatic sinecure would give him time to write. (Any writer with a day job could tell you how hard that balancing act is.) The embassy at Berlin was no sinecure, but having put his name in for diplomatic consideration he reluctantly accepted the position. In part from a sense of duty. In part because of his fond memories of the time he spent as a graduate student in Leipzig. His role as ambassador was difficult beyond all expectation. He found himself at odds regarding his role as ambassador with his superiors in Washington and his staff in Berlin. He was increasingly disturbed by German politics as Hitler rose to power, and by his inability to get Washington to take action.

Martha was a more problematic character from my perspective: it is hard to sympathize with someone who is impressed first by the Nazis and later by Communism under Stalin. As Larson presents her, Martha was politically naive and self-indulgent to the edge of scandal—a difficult quality in a diplomat’s daughter. Basically, I wanted to smack her. But there is no doubt that her accounts provide a useful counterpoint to those of her father.

Larson uses their combined experiences of life and politics in Germany in 1933 and 1934 to demonstrate that the United States government had plenty of warnings of the consequences of Hitler’s rise to power and chose to ignore them in favor of more pleasant reports. There are none so blind as those who will not see.

Fabulous book. Chilling story. There is clearly more Larson in my future.  Though maybe not immediately.  The To-Be-Read piles are large.

(1) For those of you who are new here in the Margins: I mis-type history buff as history bugg so often that I have chosen to embrace it. I’m a proud history bugg. How about you?
(2) Something I’m occasionally guilt of. Josephine Tey’s mystery novels for instance. Or more recently, Stephen King’s On Writing.  Both are excellent. And I should be ashamed of myself for not reading them for due to misconceptions created entirely in my own brain.
(3) His wife and son were with them in Germany, but they are basically wallpaper in the book.