A little less than a year ago, I posted a review of Paige Bower’s  The General’s Niece, a fascinating biography of Genevieve De Gaulle and the role she played in the French resistance  I recently read an excellent book that put Genevieve in the broader context of teenage resistants. 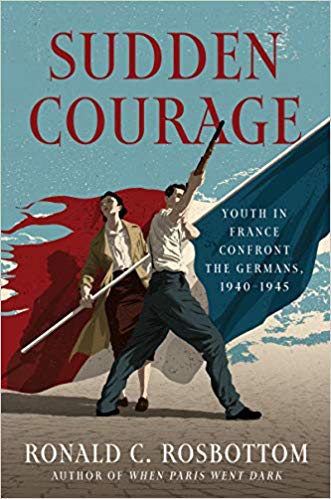 In Sudden Courage: Youth in France Confront the Germans, 1940-1945, historian Ronald C. Rosbottom, author of When Paris Went Dark *, examines the often underestimated role played by young people in the French resistance against both the Nazis in Occupied France and the collaborationist policies of the Vichy regime under Marshal Philippe Pétain in World War II.

Rosbottom begins by describing what it was like to grow up in 1930s France with an emphasis on the long shadow of World War I, the popularity of detective stories and movies, and the rise of leftist politics. When Germany attacked France on May 10, 1940, French adolescents’ lives were disrupted. An astonishing number of them chose to fight back.

Drawing on memoirs, letters and other accounts of young resisters, Rosbottom looks at what led individuals to join the resistance and how inherent qualities of adolescence, such as the urge to challenge authority, contributed to the impulse to resist. He explores the range of resistance activities, from jeering at German-produced newsreels in darkened movie theaters to joining a combat group or helping hide Jewish children. He examines the way gender roles shaped acts of resistance. He discusses the importance of existing youth groups, which provided a foundation for coordinated resistance particularly the Jewish Scout group and communist youth groups. And he makes it clear that the costs were often high.

Sudden Courage is a complicated and inspiring portrait of youthful resistants: their successes, their failures, their occasional inconsistency, and their undoubted courage.