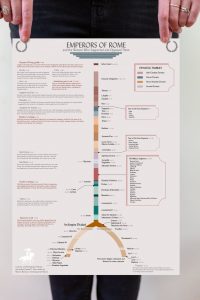 This story begins, as so many of the creative ventures in my life do, with an off-hand comment by a friend.(1)

Actually, the story begins six months before that, when I was working on a section of Women Warriors (2) and realized that I wasn’t comfortable writing “The Roman Empire was in crisis in the third century BCE” without having a clear sense of what that meant. I immediately headed down a rabbit hole that included building a timeline of the reigns of the Roman emperors.(3)

It was a useful, if time consuming, tool. But I didn’t think very much about it as I moved forward in the book and on to other deep dives into context.****

That changed during a brainstorming call with my writing friend Gina Conkle, who writes smart, well-researched historical romance. For reasons I no longer remember, I mentioned my Roman emperors timeline. Her immediate response was “If you made a poster of that you could sell them.” I did not have time to even think about creating/marketing/selling a poster. The whole idea was overwhelming. But a seed was planted.

I sat on that idea for more than a year. Then, in an interview with Kate Jermain of The Exploress podcast, I mentioned the timeline, and Gina’s idea. Kate said, “If you wanted to do that Mr. Exploress could design it.”

It took us several months to even get started, but we now have that timeline and it is gorgeous. I expanded my Aeon timeline into an insane multipart, color-coded spreadsheet. (Not easy. Excel was never intended for this purpose.) Mr. Exploress transformed that mess into a thing of beauty and clarity.

It is available two ways:

1. You can sign up for my newsletter and get a downloadable version. Here’s the sign-up link: http://eepurl.com/dIft-b . (Don’t worry. Those of you who already get the newsletter will also have a shot at this.)

2. You can buy the poster from The Exploress shop. (They make beautiful stuff. I have some of their notecards and I am hoarding them.)

Or you could do both!

*It sometimes feels like my life has been the nerd version of those old movies where someone looks around an empty barn and says “Let’s put on a show!” On occasion it has even involved putting on a show. Though never in a barn.

**I section that did not ultimately make it into the book.

***As I’ve mentioned in the past, I’m a big believer in timelines.

****Including the Danish occupation of England, the beginning of Tang dynasty China, the Thirty-Year’s War, the Scottish Wars of Independence and the disintegration of Alexander the Great’s empire after his death. As I’ve mentioned once or twice, the real problem with writing a global history of anything is that it is global.