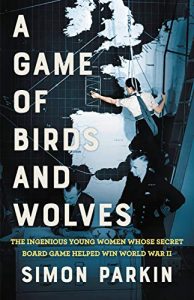 The Battle of the Atlantic was the longest continuous military campaign in World War II. German U-boats targeted convoys of British merchant ships and the naval vessels that escorted them, with the goal of starving Britain into submission. By the end of 1941, Germany was succeeding—a fact that was a closely guarded secret in Britain.

In A Game of Birds and Wolves: The Ingenious Young Women Whose Secret Board Game Helped Win World War II, journalist Simon Parkin tells the largely forgotten story of how Captain Gilbert Roberts, a retired naval officer brought back into service as a result of wartime manpower shortages, and a staff of young Wrens (Women’s Royal Naval Service) helped turn the tide of the war. Together Roberts and his unexpected team created successful anti-U-boat tactics and trained almost 5000 British naval officers in their use. Their method? A room-sized board game based on previously lost sea battles.

I loved this book, but the sub-title is deceptive. Parkin gives full credit to the Wrens for the key role they played in defeating the U-boats, but if you’re looking for a World War II version of Hidden Figures, you will be disappointed. A Game of Birds and Wolves is not an a addition to the growing genre of forgotten women’s history.

On the other hand, if you’re looking for well-told account of innovation and grace under pressure, this is the book for you.  Parkin’s work is a powerful account of an under-told piece of World War II history, told from the perspectives of not only Roberts and his team of Wrens, but those of victims of U-boat attacks, Robert’s German counterpart, several U-boat commanders, and a number of British naval officers.  It is smart, suspenseful, and occasionally heartbreaking.