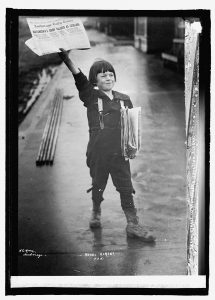 Those of you who subscribe to my newsletter got the word yesterday* and may want to skim to the bottom of the post. But for the rest of you:

After hinting for months, I’m pleased to tell you that I have a contract with Beacon Press for a new book and I’m ready to begin the next adventure.

Allow me to introduce you to Sigrid Schultz of the Chicago Tribune:

Sigrid Schultz was the Chicago Tribune‘s Berlin bureau chief and primary foreign correspondent for Central Europe from 1925 to 1940. It was a period of big ideas and big events, and Schultz was at ground zero for many of them. She was one of the first reporters—male or female—to warn American readers of the Nazi menace. At a time when women reporters rarely wrote front page stories, her connections in Berlin society, her colloquial command of German, and her understanding of Germany’s history and politics allowed Schultz to regularly scoop her male counterparts on major news events, including the impending death of Weimar Germany’s first president in 1925 and Hitler’s non-aggression pact with Russia in 1939. William L. Shirer, author of the Rise and Fall of the Third Reich, who reported from Berlin from August 1934 to December 1940, admitted, “No other American correspondent in Berlin knew so much of what was going on behind the scene as did Sigrid Schultz.”

I’m looking forward to digging into Sigrid’s story over the next two years. It’s a story that includes working around glass ceilings, keeping the news flowing despite tightening controls on the media, outwitting Nazis in Germany, standing up against pro-Nazi sympathizers at home, and dealing with claims of “fake news” on both sides of the Atlantic, plus a little bit of a conspiracy theory. (All issues that have resonance today, alas.)

At the moment I am working my way through twenty years of Schultz’s reporting in the Chicago Tribune.** (Thank goodness for online resources and the Chicago Public Library.) It is tedious work, because I’m building an index to the articles as I go.*** It is also surprisingly fascinating. I am getting a close up look at the events of the period that I would never get in a secondary source. And I’m finding stories that I doubt will belong in the book but will make excellent blog posts.

For the moment, let me share a small Chicago news item that ran alongside an article by Schultz on November 4, 1922:

“Maud,” the mule arrested yesterday by the Shakespeare Avenue police and charged with vagrancy,is still in custody. The police are anxious to find the owner or a home for the animal.

The past was a different place.

*In case you didn’t know, I send out a newsletter twice a month. Here on the Margins I mostly share historical stories, and misc. tidbits that didn’t fit into whatever I’m working on and the occasional book review. In the newsletter, I tend to muse about the process of writing and thinking about history. For instance, a couple of issues ago I wrote about the paradox of writing a book proposal. If this is the kind of thing you’re interested in—or if you want to hear Big News a day or two early—you can sign up here: http://eepurl.com/dIft-b

**In case you did the math and think I’m fudging: Schultz started working for the Tribune in 1919 as a translator for her predecessor as the bureau chief. She quickly made the switch from translator/Girl Friday to working journalist.

***Future Pamela will thank me.