A handful of the journalists who reported on the Second World War have kept a place in the U.S.’S historic memory in the years since the war: Edward R. Murrow, William Shirer (1), Margaret Bourke-White, cartoonist Bill Mauldin.(2) Even within that short list, Ernie Pyle was and is a special case. Only Mauldin came close to Pyle’s ability to both portray and embody the experience of the combat soldier at the front. He gave people back home what he once described as a “worm’s eye view of the war,”(3) and in the process created the prototype of the G.I. as and everyday hero. 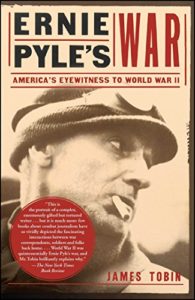 In Ernie Pyle’s War: America’s Eyewitness to World War II, historian James Tobin tells the story of how Pyle became a popular, if idiosyncratic, columnist before the war and then how he transformed his gift for telling the small story and recognizing the small detail into powerful and often lyrical reportage from the front. It is perhaps not surprising that Pyle turns out to be a more complex, though no less appealing, figure than his popular persona.

Tobin begins and ends the book with Pyle’s death in the Western Pacific. I cried both times. The first time I cried after reading a draft of a column Pyle wrote in anticipation of the end of the war in Europe. V-E Day (Victory in Europe) came three days after Pyle’s death.(4)  The piece is heart-breaking, dark, and beautiful, and an excellent introduction to Pyle’s work for those of us who come to the biography knowing Pyle only by reputation. (Which I suspect is most of us.) His editors chose not to run it, perhaps because it was darker than most of his work.

I cried the second time because, with Tobin’s help, I had come to know him. I watched him find a way out of the Kansas plains of his childhood and build a career as a newspaperman. I rode along as he traveled across the United States in a Dodge convertible coupe with his wife, Jerry—known to the readers of his column as “That Girl Who Rides With Me”—and chronicled the stories of unknown people in unknown places. (Much as I love a road trip,(5)I can’t imagine living out of a car for seven years. Seven years!) I worried about Jerry’s descent into mental illness and Pyle’s own struggles with depression.  I sympathized with his growing exhaustion. And I stood beside him in my imagination in North Africa, and the beaches of Normandy, and the Pacific island where he met his death.

Much of the power of the biography comes through Tobin’s use of excerpts from Pyle’s writing, because boy could Pyle write. For that matter, Tobin is no slouch.

Ernie Pyle’s War is powerful look at a journalist reporting from a war zone that should appeal to anyone interesting in biography, war correspondents, or World War II. Quite a model to live up to.

1) Who in some ways doesn’t belong in this list.He is remembered more for the books he wrote after he left Europe in December 1940 than for his reporting. And wonderful books they are.

2) If you think a cartoonist can’t be a journalist, give his Pulitzer Prize-winning work another look.

3)In case anyone is interested, Pyle did not coin the phrase “worm’s eye view.” According to the Oxford English Dictionary, the first known use of the term appeared in the satirical magazine Punch in 1908.

4)While I would like to claim that I careful planned the timing of this post to coincide (sort of) with the 75th anniversary of V-E Day—May 8, 1945—that would be a lie. It was just sheer dumb luck.

5)And a quick glance at the Road Trip Through History category here on the Margins will attest that I do. View this post in the browser, scroll through the categories box in the sidebar, and click away for nine years of road trip stories. (6) Here’s a link directly to the first one, in which I described what I like in a road trip and clearly had no idea it would be the first of many:

6) Nine years almost to the day. Another anniversary that wasn’t on my mind when I started writing this post. 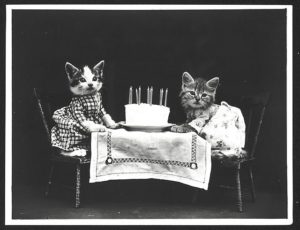