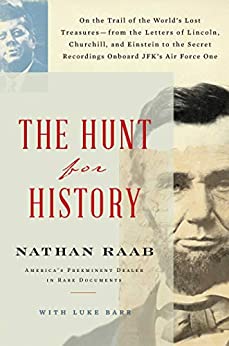 I am not a collector of anything in any meaningful sense of the word.* I am certainly not a collector of historical ephemera. Which means that I had my doubts when my stack of books to consider for review for Shelf Awareness for Readers included The Hunt for History: On the Trail of the World’s Lost Treasures—from the Letters of Lincoln, Churchill, and Einstein to the Secret Recordings Onboard JFK’s Air Force One by rare documents dealer Nathan Raab. At best, I hoped for a glimpse into a subculture of which I know little.

While I, in fact, got at a look at (and greater understanding of) the world of collecting historical documents (broadly defined), The Hunt for History was more than I had expected.

Raab tells spellbinding stories of tracking down and identifying rare historical documents and artifacts—the announcement of Napoleon’s death from a British admiral stationed on St. Helena, an outraged letter from Susan B. Anthony to a clueless autograph dealer,** and, yes, previously unknown recordings made on Air Force One on November 22, 1963. (He also shares heartbreaking stories of telling someone their family treasure is neither valuable nor authentic.)

But despite its title, The Hunt for History is more than a series of treasure hunts. Writing in a light, conversational style, Raab uses the stories of individual documents to illustrate both his education as a documents dealer, and his growing fascination with history. Working alongside his father, he learns to authenticate documents, to identify forgeries, and to recognize whether an authentic document has the historical significance of a major find. At the same time, he comes to understand how a piece of the past can provide an attachment to history. That understanding becomes deeply personal in the penultimate chapter of the book, in which Raab describes a historical discovery that changed him —the letters and library of a Jewish scientist smuggled out of Germany prior to WWII.

In the end, The Hunt for History is a delightful account of one man’s engagement with the past.

* Even my growing collection of reference books  is entirely random, with no organizing principle beyond “this would be useful” and “that looks interesting”.

**From my perspective, this story made the book worth reading all by itself.