I will admit that I approached historian James Carter’s book Champion’s Day: The End of Old Shanghai with seriously mixed feelings. 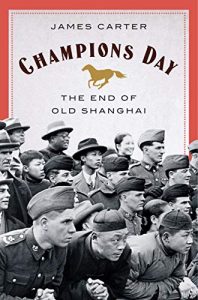 On the one hand, I spent some time last year reading about the International Settlement in Shanghai in the 1930s while I was working on a piece on self-styled “girl reporter” Peggy Hull  I was eager to learn more. I have always been interested in the times and places where two cultures meet and change each other. Shanghai was definitely such a place.  The fact that the book is World War II adjacent was a plus.

On the other hand, horse racing does not spark my imagination. And I knew going in that horse racing and horse-racing people would play a big role in the book.

Champion’s Day met my expectations on all counts.

In November 1941, the International Settlement in Shanghai had stood as a “Lone Island” within Japanese-controlled China for four years—surrounded by Japanese forces yet protected from invasion by Japan’s relationships with the countries whose nationals controlled it. With the Japanese attack on Pearl Harbor, Shanghai’s protected status crumbled. In Champion’s Day, Carter explores the history of the city through the lenses of a single cultural institution, the Shanghai Race Club, and the events of a single day, November 12, 1941, when the club held its last Champion’s Day races.

Taking the position that the Shanghai Race Club was the social heart of the International Settlement, Carter introduces readers to the world of Chinese pony racing in Shanghai: the breed, the owners, the horses, the jockeys, the gambling and the races themselves. He uses the rules for membership in the club and for attendance at its races as tools for understanding Shanghai’s history and cosmopolitan culture. He explores the complexities of racism and wealth in Shanghai, looking at the European population of the International Settlement (and its flexible definition of Europe), the role of interracial elites in constructing Shanghai’s international culture, and the attempts of the city’s Westernized Chinese elites to integrate themselves into that culture.

The result is a nuanced history of a complex, multicultural city, which was created as a compromise between European imperialism and Chinese isolationism, and developed into something that was both and neither.

I was fascinated by Carter’s depiction of the city as a cultural jumble,* including the role horse-racing played in providing a shaky link between disparate populations. However, I reached the point where I was skimping over the descriptions of horse races. They were well written and I just didn’t care. I suspect the failing is mine and not Mr. Carter’s

*I don’t think you can call it a melting pot when the different components obdurately resist melting into each other.