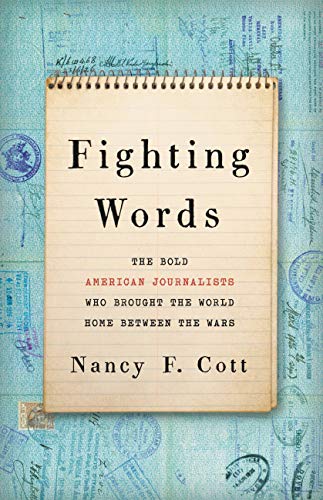 (This cover is much more impressive in real life.)

Books about foreign correspondents in the first half of the twentieth century are popular at the moment, which is a good thing as far as I’m concerned.* I am happily reading them as part of my deep background reading for the current book.  (It’s nice to have a reason to choose one book from the ever-growing to-be-read stacks over another.)

In Fighting Words: The Bold American Journalists Who Brought the World Home Between the Wars, historian Nancy Cott follows the career of four American journalists—John Gunther, Rayna Raphaelson, Vincent Sheean, and Dorothy Thompson—who built careers for themselves as foreign correspondents in the years between the two world wars. Cott looks at her journalists as part of the stream of young Americans who poured to Europe after World War I, with little knowledge of its politics, or even its languages. In the process, she gives us a larger, richer vision of the “Lost Generation”.

Her journalists—like all the Lost Generation expats—spent time in Paris,  but they were more itinerant than the writers we generally associate with that label. They traveled through China and Russia as well as more accessible European capitals, and were driven in part by the desire to understand the cultures in which they found themselves. They wanted to help their readers back home understand those cultures as well.

They may have started as innocents abroad, but they didn’t stay innocent. In their writing they moved beyond reporting the news to struggling with the big issues of the day. By the early 1930s, Gunther, Sheean, and Thompson were actively engaged in warning Americans about the dangers of fascism, in Europe and at home.**

Fighting Words is a bigger book than the story of four fascinating figures and the way their lives intertwined.  It is at heart the story of the birth of modern journalism.

*So far, as best I can tell, no one is writing about my own foreign correspondent. Also a good thing.

**One of these things is not like the others.  Raphaelson died in Moscow in 1927.  Her relationship to the others is important but her story doesn’t carry the same weight in the book.