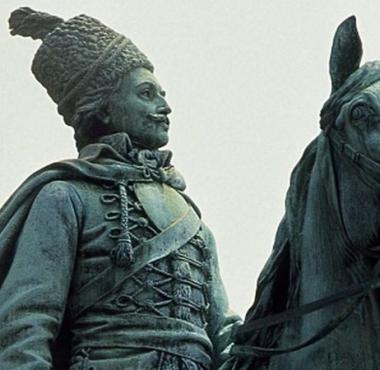 For my first ten or twelve or thirty years in Chicago, I was regularly taken by surprise by a local holiday. On the first Monday in March, Chicago’s administrative offices, and public libraries are closed for Pulaski Day, a holiday honoring Casimir Pulaski, the Polish nobleman who fought on the colonial side in the American Revolution and is sometimes grandiosely described as the father of the American cavalry.  More than once I’ve been greeted at the door of the main library by a notice that the library was closed in celebration of Pulaski Day. It did not make me feel celebratory.

The official word is that Chicago first celebrated Pulaski Day in 1986. Imagine my surprise when I stumbled across a news item in the Chicago Tribune on October 6, 1938 with the headline “Mayor Kelly Designates Oct. 11 as Pulaski Day.” * The piece was short, only two sentences. No explanation was given, other than the fact that it was the 159th anniversary of Pulaski’s death.

The piece was tucked in below a long article by Sigrid Schultz describing the Nazi occupation of the Sudetenland in Czechoslovakia. Many people believed Poland would be Hitler’s next target. Creating a holiday celebrating a Polish hero who had long been emblematic of both American and Polish freedom in this context seems to me to be a statement of solidarity, even if it was aimed at Chicago’s largely Polish population.  A small thread in a larger story.

*Pulaski made the news more recently in 2019, when an exhumation of his bones (for reasons that are still unclear to me) revealed that though he identified as male, he probably had intersex characteristics. This discovery has added nuance to the discussion of remains that appear to be women warriors, and has given people who don’t want to believe in the existence of women warriors a new weapon in the discussion. But I digress.