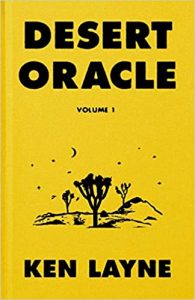 Let me make it clear from the beginning that Desert Oracle is very different from the books I generally share with you here on the Margins. It is not a work of narrative history, but history is woven throughout it. Weird history, true, but history nonetheless.

Desert Oracle is the outgrowth of a more-or-less quarterly “field guide” to the deserts of the American southwest of the same name, written and published by culture writer and former Wonkette editor Ken Layne. Following the publication of its first issue in 2015, the periodical established a cult following for its quirky and passionate exploration of the desert’s landscape, history, myths, and inhabitants (human and otherwise).

Desert Oracle’s new incarnation is an expansion of the periodical, combining previously published pieces with new material. Beginning with a piece titled “Try Not to Die,” Layne introduces readers both to the desert’s beauty and to its danger. He talks about missing hikers, ancient desert cultures, the rise of Western swing, colorful characters from the recent past, UFO and Yucca Man sightings, and the impact of Edward Abbey on the desert conservation movement.

Written in a matter-of-fact style that belies their contents, which are anything but matter-of-fact, the pieces run in length from short to very short. At first the collection appears to be a disjointed collection of fascinating pieces: a musing on ravens is juxtaposed to the story of a medical con man, which is followed by a complicated essay that begins with the Goldstone Deep Space Antenna Station and ends with occultist and rocket scientist Jack Parsons. In fact, the book is held together by what Layne has described in interviews as the “weirdness of the desert:” the cruel, the terrible, the sublime and the inexplicable. With an emphasis on the inexplicable.

I found it fascinating.