Today’s blog post just blew up in my face.  It happens.  Instead of scrambling to put something together, or simply not posting, I decided to run an updated version of a post from 2015 that relates to some of the issues I was thinking about.  There will be new stuff next week,I promise.  And an entire month of Women’s History Month’s posts in March.

Unlike most of the women I know who grew up reading Little Women, I was never indignant that Jo March married Professor Bhaer instead of the adolescent golden boy, Laurie. That kiss in the rain under the umbrella defined romance for me. I was always firmly on Team Professor. And now I think I know why.* I suspect Professor Bhaer, Fritz to his friends, was a 48-er.** 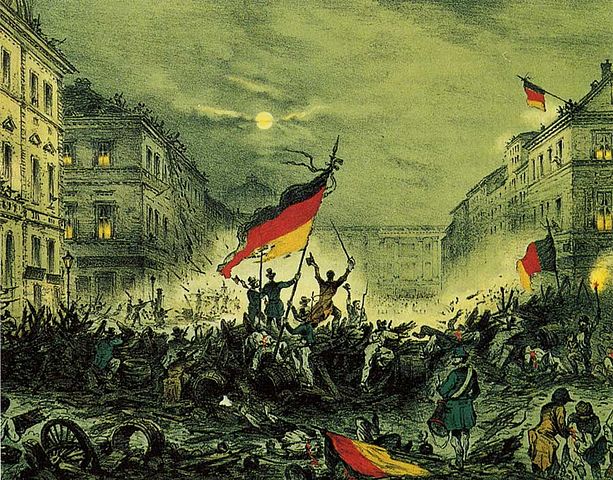 As is so often the case with me, it’s been a multi-step epiphany, spread over several years.

I took my first step toward this realization four or five years ago when My Own True Love and I visited my hometown Civil War battlefield, Wilson’s Creek. Walking the self-guided tour at Wilson’s Creek was a regular part of my childhood and adolescence, so I didn’t expect to learn anything new. Silly me. In that visit I realized for the first time how many Germans took part in the battle. Not German-Americans. German immigrants. In fact, at least one unit was made up entirely of Germans who spoke no English. They had marched south from St. Louis into the sauna of a mid-South summer to fight with patriotic fervor for their adopted country. Interesting, I thought, then my attention was diverted by George Caleb Bingham’s Order #11. The question of Germans in the Civil War slid into a back pocket in my brain.

Germans in the Civil War grabbed my attention again a couple of years later, when I was working on a book on the history of socialism and plunged into the revolutions of 1848–something I had only been peripherally aware of before. Sometimes called the “revolution of the intellectuals, the movement began on January 2, 1848, when Palermo, in Sicily, rose up against its ruler. Over the next four months, more than armed rebellions occurred across Europe, in France, Austria, Prussia and most of the smaller German and Italian states. There was no single revolutionary organization or movement. No coordination across national boundaries. In state after state, socialists, intellectuals, middle class professionals, the urban poor and the peasants united against absolutism and the remains of feudal privilege. In state after state, the revolutions failed, put down with varying levels of brutality by governments with no interest in participatory government. By 1849, not only had the revolutionary impulse been crushed, but the political situation in many countries was more repressive than it had been before the revolts.

Thousands of German revolutionaries fled to the United States in the last half of 1848. Most of them settled in the newly industrializing cities of the Midwest, where they profoundly shaped the culture of Milwaukee, Cincinnati and Ohio. A substantial minority settled in the Texas hill country. Others found work in the textile mills of New England. They opened small manufactories, established newspapers, and formed mutual-aid societies. As a group, they fit in well with the “benevolent empire” of reform associations dedicated to temperance, asylum and penal reform, women’s rights, education, and, most important of all, abolition that stretched across the northern United States in the years before the civil war. Having lost their own fight for greater freedom in their home countries, they were for the most part fervent abolitionists. When the Civil War came they enlisted in disproportionate numbers to fight in what to their eyes was a simple fight for freedom.

And what, you may ask, does all that have to do with Professor Bhaer? Patience, children.

A few years later, while I was working on Heroines of Mercy Street, I had the opportunity to read not only the description of the home life of one of the 48-ers who immigrated to America, but his letters to the woman he married. They paint an appealing picture of a domesticated revolutionary: a little house lovingly kept and simple pleasures shared with friends. The tone of the letters was sweet, playful–and very familiar. They nagged at me for a couple of days and then I got it–Professor Bhaer! Gustav von Olnhausen sounded exactly like Professor Bhaer! I was gobsmacked.

*To all my male readers who are glaring at their screen or giving baffled shrugs, trust me. History is about to begin.
**Not to be confused with the ’49-ers of the California Gold Rush. Though now that I think about, I wonder if the United States was affected by the Hungry ’40s in ways other than the flood of new immigrants? Anyone?