Miranda Garno Nesler is unique among the people I have interviewed for this series. She is a rare books dealer who specializes in documents by women, BIPOC, and LGBTQ+ people. When I heard her speak on the What’s Her Name podcast, I wanted to know more.

Miranda earned her PhD from Vanderbilt University and serves as the Director of Women’s Literature & History for Whitmore Rare Books. At WRB, she researches manuscript and print materials through which women, BIPOC, and LGBTQ+ people told their own stories; and she places them with institutional clients around the globe to ensure that students and researchers can access a more diverse swath of history. She has been an invited speaker for a range of organizations including WriteGirl LA, The American Culinary Museum, The Belletrist, WhatsHerName? Podcast, and the Antiquarian Bookseller’s Association of America (ABAA). Past work has been published in The Shakespearean International Year Book, Studies in English Literature, and The Journal of Narrative Theory. Her essay on the 17th century printer Elizabeth Holt is slated to appear in the collection Making Impressions: Women in Printing and Publishing (Legacy Press, 2021).

Take it away, Miranda! 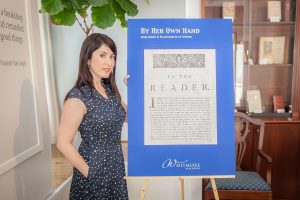 My early education played a major role. Attending an all-women’s prep school, I was surrounded by brilliant, talented people. Our professors were largely women who’d earned advanced degrees in the 1950s-70s but had been discouraged from pursuing or were denied full time university teaching positions. More often than not, they were open about the obstacles they’d faced in advancing their educations; and they encouraged us as a student body to foster each other’s abilities, collaborate, and generally lift each other up. Despite this, we read very few books by or about women in our classes, which were still modeled on a very Euro-masculine-centric humanist model. It made me curious. We had heard the histories of our professors, but they were certainly not the first generation to fight for education or employment. What were even earlier women doing, what kinds of communities did they form together, what barriers did they face or overcome, and why didn’t we know more about them? Wouldn’t learning about them tell us something about ourselves? And if we reconsidered history with them at the center, might we better position ourselves and the women after us to be at there instead of on the margins?

By the time I made it through college and into my advanced degree, these questions had become the ones that would shape my life and my career. My goal was to use the textual materials women made or used to learn not only about major historical “firsts” – the first woman published in England, the first paid woman dramatist, the first woman admitted to a university – but to find the stories of the women quietly and in their daily lives shaping the world around them. Curators, librarians, and their generosity in sharing knowledge of their collections made this work possible.

How did you get started in rare books?

I’ve always been fascinated by the physicality of history – how material things preserve what we think as well as how we make things, how we use things, how we share things, and what that says about us as individuals and groups. As a child, I remember buying a book of Arthurian legends from a vintage bookshop. I had been drawn to its size (designed to fit easily in a hand or a pocket, as many Victorian books were during the rise of train travel); and I loved the binding (what I now know to be a 19th century publisher’s cloth binding embossed in blind). Reading it, I loved it even more. It had previous owners’ bookplates on the front pastedown. And not only had one person left notes in the margins regarding the sources of those stories or the changes the editor had made, but another reader had left annotations responding to the first set of notes. Even though I couldn’t articulate it at the time, it was an early realization that the people who engaged with this book had become a part of its physical identity – this copy was now unlike any other. These people had also shared their knowledge with me, even though we would never meet or talk. The book as an object connected me to a matrix of other authors and other readers.

My obsession with physical texts and signs of use wove into my interest in women’s history; as time went on, I seemed to find women everywhere. Their ownership signatures and gift inscriptions in books. Lists of the contents of their libraries. Manuscripts they wrote and exchanged. Modern editions and the anthologies I encountered in school might not have women – but women had left their marks all over the world of rare books and manuscripts. Finding them meant that I could connect with them; sharing them meant that others could too. I gained a keen awareness of the fact that we can only teach or research what is accessible. In my role as a book dealer specifically collaborating with faculty and curators at their libraries, I get a chance to place and preserve this material, to give it context, to show that it matters just as much as the holdings that were previously more privileged. I get a chance to ensure that people see themselves represented and can find their history on the shelves.

Belle da Costa Greene. When we think about the material preservation of history and the public’s access to materials that teach it, she’s a critical figure. As the private librarian to J.P. Morgan and the first director of what is now the Morgan Library & Museum, Greene developed a world class collection, preserving rare books and manuscripts that shape scholarship and popular culture today. She overturns the myth that the world’s greatest antiquarian collections were solely built by, benefited, or represented men; and she highlights the importance of diverse people being in these positions of authority. After all, in curating the collection, which required vast insight and knowledge, Greene infused it with her own tastes, preferences, and values. She used her situation to promote the work of women intellectuals; and, likely because of her own background, she was committed to expanding public access to library holdings. Greene is also an example of the powerful and often under-acknowledged influence of Black women in America. Hers is an important story of the social challenges confronted by and the violence enacted on BIPOC communities in a systemically racist culture that privileges a homogenous, white idea of “intellectual.” Greene’s father had been the first Black graduate of Harvard; but she would eventually change her last name, restructure her personal narrative, and begin “passing” as white before taking her first major job at Princeton. It was revolutionary for a woman to rise in the ranks of the rare book world as she did – vying against wealthy men at auction, gaining their respect, dictating institutional policy, conducting and presenting research, building a world class collection. But to do so while being forced to deny part of her identity, which she feared would put her accomplishments at risk (what she called “living behind the curtain of my mind”)? Hers is a story I feel everyone should know. History-makers aren’t all one type. Some heroes make history by preserving it.

…..And a question for you.  Among women living today, who is someone you believe will or should be remembered in history books, historical novels and films?

There are some obvious choices here: Kamala Harris, Hilary Clinton, Alexandria Ocasio-Cortez. But I’d like to step outside the political arena and suggest a group of women from the world of STEM: the women who worked at NASA in the early years.

One of my most vivid memories of grade school was carrying my chair to the all-purpose room to watch rocket launches. The (male) astronauts were the main thrust of the story. The engineers and scientists who made the space program possible were seldom mentioned. But when they were, I was left with the impression that they were all men. The women whose story was shared in Hidden Figures were not alone.  And I know of at least one nerdy little girl who would have been happy to know about them.

Want to know more about Miranda Garno Nesler and her work?

The only full-length biography of Bella de Casta Greene: https://www.themorgan.org/shop/books-and-media/illuminated-life-belle-da-costa-greenes-journey-prejudice-privilege

*   *   *
Tomorrow it will be business as usual here on the Margins with a blog post from me. But we’ve still got more people talking about women’s history from a lot of different angles next week. Don’t touch that dial!