One of the great pleasures of writing History in the Margins is the opportunity to carry on conversations with readers “off the page.” I love it when one of you expands the story with additional information or gently corrects me when I go astray. Long-time reader Jack French occasionally takes it one step further and not only shares a story with me, but allows me to share it with you. (You may remember his wonderful post on the woman who invented Monopoly. )

This is one of those times. Take it away, Jack: 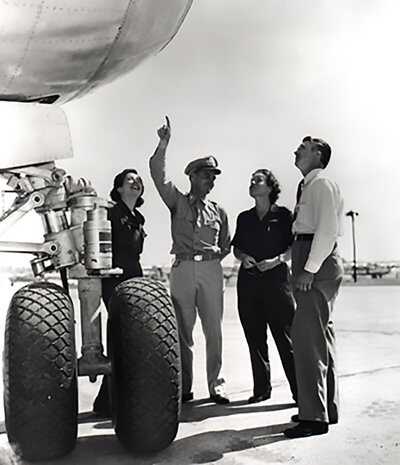 Since this is Women’s History Month, I’d like to tell you about two very significant women you’ve probably never heard of before:  Didi Moorman and Dora Dougherty. This duo played an important role in our eventual victory in WW II. Their story is inspiring, although history has almost forgotten them.

In 1943 when the enormous four-engine B-29 “Super Fortress” was still in early test flights, many problems with it occurred which Boeing was having trouble fixing. One main problem was engines catching fire. In February of that year, Boeing’s top test pilot, Eddie Allen, was on a test flight with 8 other crewmen when an engine caught fire, leading to a catastrophic wing failure and the plane crashed, killing the entire flight crew and 19 civilians on the ground. There were B-29 failures before but none this serious.

Word spread throughout the Army Air Corps, and its pilots started doing everything to stay out of the B-29. Its scary nick-name was now “Eddie’s coffin.”  The hand-picked men who were being trained to fly this new complicated bomber were resistant to fly it and some absolutely refused to get in the cockpit. The officer in charge, Lt. Col. Paul Tibbets, knew something had to be done to correct this situation. His plan was bold: get women pilots to show the men this giant military aircraft was safe and reliable.

The only women pilots in the military were those of the Women’s Airforce Service Pilots (WASP) who were federal civilians in the ferry service who were also towing targets and instructing new male pilots. In June 1944 Tibbets recruited two WASP pilots:  Didi Moorman and Dora Dougherty, assigned to Eglin Army Air Force Base in FL. Neither of these experienced pilots had ever flown a 4 engine bomber. Instead of the six month training program that male pilots received before flying a B-29, Tibbets trained the two women for only three days before he decided they were ready for their demonstration. This was because the two women were experienced, highly motivated, well trained, and unlike their male counterparts, actually followed Tibbets’ instructions to the letter.

Next Dora and Didi, with a male crew, piloted a series of successful demonstration flights out of the heavy-bomber base at Alamogordo, NM with male pilots watching on the ground. Within days, the men stopped complaining, got over their fears, and resumed training on the B-29.

Jack French is a former Navy officer and retired FBI Agent in Virginia. He is a vintage radio historian and the author of two published books on the subject. Jack is a guest lecturer whose topics include: Civil War Heroines, History of Toys & Games, and the Golden Age of Radio.
www.jackfrenchlectures.com

On Monday, it’s back to Women’s History Month, with Three Questions and an Answer with historian Nancy Goldstone, who writes about powerful women in medieval and early modern Europe.

If you’re interested in the process of writing and thinking about history, you might enjoy my newsletter, which comes out roughly every two weeks. The content is totally different from History in the Margins. In recent months I’ve discussed forgotten female photojournalists, cliffhangers, the odd experience of reading history “in real time” in the form of old newspapers, and the question of “first-naming” the subject of a biography. If that sounds like your bottle of beer, you can subscribe here: http://eepurl.com/dIft-b