I discovered historian Lisa Levenstein while listening to one of my favorite writing podcasts. (#AmWriting with Jess and K.J. for anyone who’s interested.) Her work sounded fascinating. As soon as the podcast was over, I did a little research, decided that her work sounded even more fascinating than I originally thought, and immediately sent her an invitation to be part of this series.*

Lisa is Director of the Women’s, Gender, and Sexuality Studies Program and Associate Professor of History at UNC Greensboro. She is the author of the award-winning A Movement Without Marches: African American Women and the Politics of Poverty in Postwar Philadelphia (UNC Press, 2009) and They Didn’t See Us Coming: The Hidden History of Feminism in the Nineties (Basic Books, 2020). Lisa’s research has been supported by long-term fellowships from the American Association of University Women, the Center for African American Urban Studies and the Economy, the National Humanities Center, and the American Council of Learned Societies. She is a founding executive board member of Scholars for a New Deal for Higher Education, the Vice Chair of the Board of Governors of UNC Press, and co-host of the podcast Collegeland.

Take it away, Lisa: 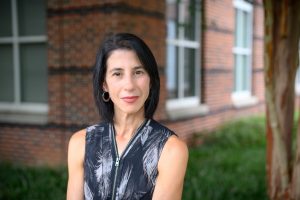 You write about women who are not generally included in the history of feminism.  How does the addition of women of color and working class women change our understanding of the feminist movement?

While the media has often characterized feminism as a white middle-class women’s movement, women of color and working-class women have been working to advance feminist goals for just as long as white women. When we include a broad range of actors in our histories of feminism, we can better understand the breadth and goals of the movement. In the 1990s, activists insisted that every issue was a feminist issue–from environmental justice to labor rights. They fought for reproductive justice and welfare rights while protesting against police brutality and free trade. Feminism in the 1990s was a broad umbrella thanks in large part to the efforts of working-class women and women of color.

I was a history major in college but did not get exposed to women’s history until a course I took on European women’s and gender history in my junior year. The professor, Carolyn Dean, taught us about how gender ideology was deeply ingrained into all aspects of politics and culture. Although the course focused on Europe in the eighteenth and nineteenth centuries, it fundamentally altered my understanding of contemporary politics and culture in the US. When I realized that one course had changed how I read the newspaper, watched television, and debated with my friends, I was hooked.

Unlike many of the people I’m interviewing, your work deals with the recent past. Are there special challenges to researching and writing about women in the periods you study?

Writing about the 1990s was a joy because I could interview people about their lives and work. But writing about living people who were part of the same movement is tricky because they each have their own recollections of specific events. After hearing several different versions, I tried to compare the information in the interviews with the available primary documents. But here again, the benefits of researching the recent past (there are a plethora of documents) also posed a challenge. There are so many available accounts of the events of the 1990s that it’s hard to know when to stop researching. To make things even more complicated, in the 1990s, the Internet was starting to become a force in people’s lives, and many feminists were very active online. Fortunately there have been efforts to catalogue early webpages and many of the activists I studied printed out their e-mail messages, leaving a paper trail for historians. I’m not sure how we will track the correspondence of our current generation, since most of our email is privately stored on our computers or in cyberspace. Many of us also interact with other people on social media platforms like Facebook and Twitter. Skilled archivists are tackling these questions but I suspect that the digital age will pose unique challenges to future historians.

Question for you (I will continue the theme :-): Is women’s history a feminist project?

The short answer is: yes. But I suspect that you were looking for something a little more substantive here.

Actually, Lisa answered this for me. One class on European and gender history taught her how deeply gender ideology is interwoven into not only our understanding of history, but into our understanding of how society works. In fact, interwoven is too mild a word. Gender ideology is a Gordian knot of knowledge, beliefs, and habits. Every women’s history class, every book about a forgotten woman from history, every article that reveals a woman whose name was left out of the story helps loosen that knot just a little bit.

*Moral of the story for any writers in the audience: Being a podcast guest is definitely an effective way to reach potential new readers. 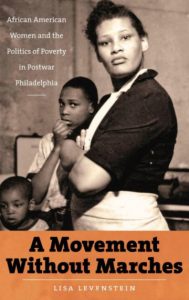 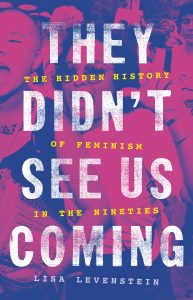 Want to know more about Lisa Levenstein and her work?

Listen to her podcast: https://www.collegelandpod.com/

Come back tomorrow for three questions and an answer with author Mary Cronk Farrell, who writes about little-known women in American history for a young adult audience. (Catch ‘em while they’re young!)

If you’re interested in the process of writing and thinking about history, you might enjoy my newsletter, which comes out roughly every two weeks. The content is totally different from History in the Margins. In recent months I’ve discussed forgotten female photojournalists, cliffhangers, the odd experience of reading history “in real time” in the form of old newspapers, and the question of “first-naming” the subject of a biography. If that sounds like your bottle of beer, you can subscribe here: http://eepurl.com/dIft-b (When you subscribe, you’ll get a link for a very cool downloadable timeline of the Roman emperors and the women who fought against them or supported them, which I created with the people behind The Exploress podcast.)