One thing I’ve missed over the last year has been “browsing with serendipity” in the library stacks.* My mother brought the phrase home from one of her library science classes a million years ago and it perfectly describes the feeling of finding a book that you didn’t know existed—and consequently didn’t know you needed—snuggled up next to the book you were looking for. As far as I’m concerned, it’s everyday magic. 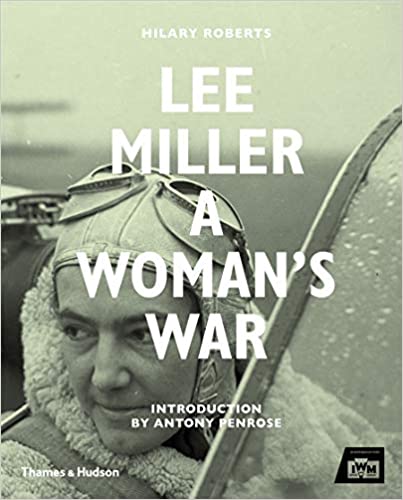 Recently I experienced that same magic while browsing the on-line catalog for the Pritzker Military Library. I don’t remember what book I was looking for. I don’t even remember if I found it. But one thing the catalog turned up was  Lee Miller: A Woman’s War by Hilary Roberts, photography curator at the Imperial War Museum in London.** It wasn’t directly related to what I was working on, but it looked interesting, so I added it to the list of books to have pulled. Boy, am I glad I did! It it not just a thing of beauty, it also addressed a number of issues that I’m working through in the current book.

This is the sum total of what I knew about Lee Miller before I read the book: 1) She was a photojournalist in WWII 2) She was a supermodel for Vogue before she was a photographer 3) She was involved with surrealist artist and photographer Man Ray for several years 4) Another photographer took a picture of her bathing in Hitler’s tub after the Allies reached Berlin.*** All of those things were true.  (Though it turns out the bathtub picture was taken in his apartment in Munich, not Berlin.)  But they were only a small part of the story.

Roberts provides the reader with a brief, compelling biography of Miller that centers on her work as a war correspondent and photojournalist for British Vogue. **** But Lee Miller: A Woman’s War is, at heart, a very smart picture book. Roberts uses Miller’s photographs (and photographs of Miller) to explore the photographer’s career and, more importantly the woman-based vision of World War II that she created for Vogue. She includes

The result is a powerful portrait of women in the war.

I liked the book well enough that I intend to buy a copy of my own. In the meantime, my library copy bristles with yellow sticky notes and my brain is buzzing with story ideas and research questions.

Browsing with serendipity works its magic once more.

*That said, the ability to pick up books from the Chicago Public Library and the Pritzker Military Library  has been a lifeline for me over the past year. (One of the reference librarians at the Pritzker even mailed books to me.) I haven’t been able to get everything I want, but I’ve been able to get enough to keep moving on more than one project. God bless librarians!

**On my travel bucket list for the future when travel is possible once more. Are you listening, universe?

***I must say, the thought of that makes my skin crawl. On the other hand, I haven’t been traveling with the army for months without the luxury of regular baths. In her shoes I might have been less squeamish about Hitler cooties, too.

****And now I understand why a woman’s magazine would have a war correspondent. One questions ticked off the research list.

*****Including a photograph of the all-female staff of British Vogue working in the basement of their Bond Street offices, for a feature titled “Here is Vogue, in Spite of All!”

On Monday, it’s back to Women’s History Month, with Three Questions and an Answer with historian Tiffany Sippial, talking about Cuban revolutionary Celia Sánchez Manduley. (Can you say “woman warrior”?)

If you’re interested in the process of writing and thinking about history, you might enjoy my newsletter, which comes out roughly every two weeks. The content is totally different from History in the Margins. In recent months I’ve discussed cliffhangers, the odd experience of reading history “in real time” in the form of old newspapers, the question of “first-naming” the subject of a biography, and , well, women photojournalists. (You can tell where my mind’s been lately.) If that sounds like your chocolate Easter bunny, you can subscribe here:  http://eepurl.com/dIft-b .(When you subscribe, you’ll get a link for a very cool downloadable timeline of the Roman emperors and the women who fought against them or supported them, which I created with the people behind The Exploress podcast.)