Rationing, shortages, and the clever ways people coped with them are recurring themes in books about the American home front in World War II, fiction and non-fiction alike. (Even the new roles of women in the workplace were the result of a critical shortage of men.) Food and gas rationing, rubber and metal shortages and scrap drives are all very familiar to anyone who spends any time in the period.

Today I stumbled across a new shortage while reading Sigrid Schultz’s letters: typewriters. 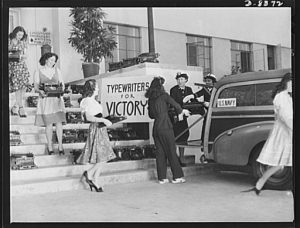 Two forces combined to create a major wartime shortage. Like other manufacturing companies, typewriters companies were asked to retool their plants to produce war material, including machine guns, rifles, bullets, propellers spare part for airplane engines and Hagelin-style cipher machines.* At the same time, tens of thousands of people, mostly “government girls,” filled new defense jobs, where they discovered a serious shortage in office supplies, especially typewriters. Shortly after Smith-Corona, Royal, and Underwood stopped making new typewriters, at the government’s request, the government discovered that quadrupling its civilian work force meant it needed thousands of new typewriters. 600,000 to be precise.

The government found workarounds. Some offices went on a 24-hour schedule so that available typewriters never sat idle. Typewriters were rationed: beginning in March, 1942, you had to have a certificate from your local ration board in order to purchase a typewriter. Assuming that any were available for purchase.

But more typewriters were needed. A public relations campaign called “Forty-Two Keys to Victory” was designed to fill the gap. Individuals were urged to donate late-model, non-essential typewriters to the military. Industries that made heavy use of typewriters, like Hollywood and newspapers, were pressured to contribute one out of four of their machines. 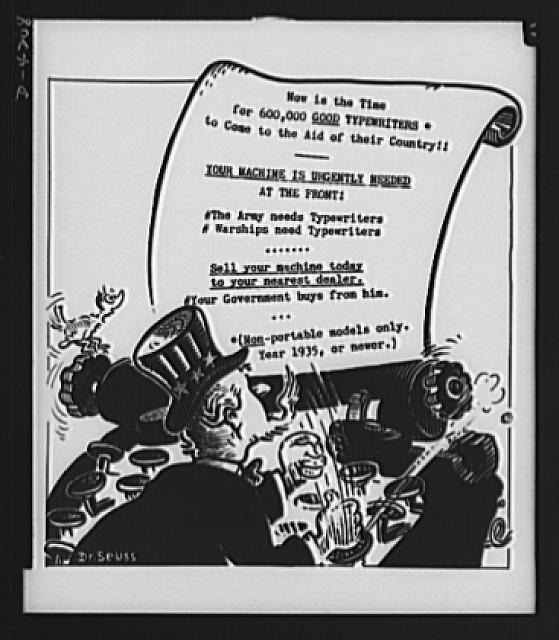 Apparently the typewriter is as mighty as the sword. Who knew?

*I had to look up the cipher machines. Click the link if you want to know more.