Here is the way our road trips work: My Own True Love and I head off with a general plan. We have one or two things we know we want to do. We figure out what we plan to see and where we are staying each night as we go. We stop at every historical marker we pass* and as many historical sites and museums as we can. We especially love the little sites that don’t show up in the state travel brochures and consequently aren’t part of the day’s plan: case in point, Apple River Fort,  a state historical site in Elizabeth, Illinois.

The battle of Apple River Fort was a minor incident in the Black Hawk War of 1832,** the sort of skirmish that does not shape the course of events except at the local level. (For that matter, the Black Hawk War was itself minor and local in scale, if not in the way it contributed to the larger picture of conflict between settlers and Native Americans.)

The Apple River Settlement began life as a lead smelting camp. By 1832, it had grown into a considerable village, complete with families. In May of that year, the residents of the settlement learned that Black Hawk and his men had routed the Illinois militia at the battle of Stillman’s Run on May 14th.*** The terrified settlers built a small palisaded fort in eight days.**** 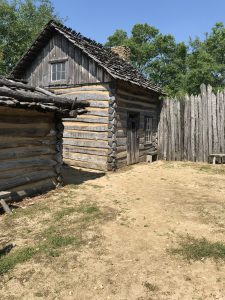 On June 24, four dispatch riders who were traveling from Galena with correspondence for General Atkinson stopped at Apple River for a brief rest. Soon after they had left the fort, they ran into Black Hawk and about 200 of the Sauk, who fired on the dispatch riders, wounding one of them.***** Three of the riders retreated to Apple River to warn the settlement; the fourth rode back to Galena, hoping to return with the militia.

The Sauk besieged the fort. The forty-five residents of the settlement (plus three members of the militia) defended the fort for about an hour.

Up to this point, the story of the Apple River Fort is a pretty standard incident in the Black Hawk war. The historic site tells the story in an even-handed way, using contemporary quotations from both sides of the story.

Now comes the twist: After an hour of battle, the men of the fort were prepared to surrender. The women of the fort, led by one of Elizabeth Armstrong, took up arms, reloaded guns, and continued the fight. One presumes that the men fought on as well.

Finally, Black Hawk withdrew. The Sauk raided nearby cabins for supplies—not surprising given that hunger was their primary motivation—and moved on. The settlers’ casualties amounted to one dead and two wounded. Blackhawk lost none of his men.

The fort was taken down in 1847 and the town was renamed Elizabeth to honor the women who defended the fort. (Elizabeth Armstrong was one of three women named Elizabeth there that day.)

I don’t have enough information to know whether Elizabeth Armstrong actually rallied the fort’s flagging defenders, aided by the other women of the settlement, though I’ve read dozens of similar scenes in accounts of besieged cities. And in fact, the narrative on the website does not include the incident, though it appears in the display at the interpretative center.

I have no doubt, however, that women and children fought at Apple Creek. A letter written by one of the residents after the battle clearly describes young girls making cartridges and running guns and women active in the defense. I’m not surprised.

Over and over while doing my research for Women Warriors — I found instances of ordinary women who fought to defend themselves in cases of siege. In the fourth century BCE Chinese statesman Yang Shang called them “the army of adult women” and he recommended that military commanders use them to help defend a besieged city. Over the centuries, the “armies of adult women” who fought on the walls and in the trenches to defend their cities far outnumber all the other women warriors put together.

I have no doubt that the three Elizabeths and the other women of Apple River Fort fought that day, as so many other women did before and after them.

*Assuming we can find them. Some historical markers are surprisingly evasive.

***A description, not a place name. Attacked by the Sauk, forces under the command of Major Isaiah Stillman panicked and, well, ran.

****Fifty feet by seventy feet, with a cabin in one corner and a blockhouse in the other. To use the cliched size comparison, which I do not find particularly useful since I am not a football fan, less than 1/3 the size of a football field.

*****FYI, I always view estimates of the size of an enemy on the field with caution. The larger the enemy, the grander the victory or the more understandable the panicked rout. Story-building issues aside, many people find it difficult to estimate the number of people sitting quietly in a lecture hall. How much harder would it be to estimate the number of screaming people running at you with weapons?