[Warning: Blatant self promotion ahead] 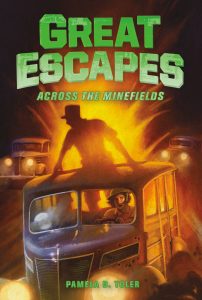 Last July I had a writing predicament. I had signed a contract to write my book about Sigrid Schultz, but the archives I needed to access were closed thanks to the pandemic and no one knew when they would re-open.*

In order to fill the gap, I agreed to write a book for HarperKids’ Great Escapes series. Around here, we called it the “little book,” as opposed to the “big book” on Sigrid Schultz. The timing turned out to be perfect. The first archive opened in mid-August, just as I turned in the first draft on the little book.

The “little book”, Across the Minefields, came out earlier this week. It’s the real life story of a woman army driver in Africa in World War II, who later became the first–and as of the last time I looked, the only— woman in the French Foreign Legion.  (Could a story be any more in my wheelhouse?) Here’s the official description:

June, 1942–Libya. Free French Officer Susan Travers was one of the few women on the frontlines in Africa during World War Two. After the Germans surrounded the military camp of Bir Hakeim, a shocking order was issued. The French troops were going to break out in the middle of the night–crossing through dangerous minefields and enemy territory–to reach their British allies. And Officer Travers would be leading the charge.

With the lives of thousands of military men at risk, stakes were high. But Officer Travers didn’t face rejection and break gender barriers to back down now. Her country needed her to fight. And win.

If you’re eight-to-twelve years old and like true adventure, or know someone who is, Across the Minefields is available wherever you buy your books.

As for the big book, the second archive will be open next week. I couldn’t be more thrilled.

*In all honesty, I wasn’t completely dead in the water. I had plenty of background reading to do, and I had large stash of relevant books. Thanks to a heads-up from the privileges manager at the University of Chicago’s main library I made a raid just before they closed. Library people rock!