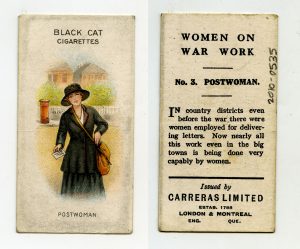 My second favorite novel by British mystery author Dorothy Sayers is Murder Must Advertise,* in which her dashing sleuth Lord Peter Whimsey goes undercover as an entry level copy writer at an advertising agency where evil is afoot. He solves the murder of course, because that’s the way these things happen. But he also gets caught up in the advertising business and creates the idea for an advertising campaign for a cigarette company called Whifflets that takes off in a big way: people collected coupons and used them first to travel and later to collect all manner of worldly goods.  Except coffins, it not being “admitted that any Whiffler could ever require such an article.”

The campaign, and the clever language in which Sayers describes it, always amuses me. So imagine my amazement when I discovered something similar on a smaller scale in the form of Black Cat cigarettes while tracking down a factoid for my latest article for MHQ:The Journal of Military History.

Black Cat cigarettes were first introduced in 1904. The company began to use their cigarette packages as a vehicle for promotion almost immediately. At various points in the years prior to World War I they offered a program similar to S & H Green Stamps,** the Black Cat Library of Short Stories (a series of forty adventure tales), and a popular coupon program not unlike Whimsey’s Whifflet promotion.

If that was all Black Cat did, I would have just enjoyed the moment when fiction and history collided, but in the First World War, Black Cat stepped up. The company sent gift packages to British troops, with French phrase books inside the Black Cat cigarette packs. In 1914, they offered miniature cardboard Allied flags. And in 1916 they produced the first cigarette cards–similar to baseball cards in bubblegum packs.*** These cards didn’t celebrate anything as innocent as the national pastime–they were produced in alliance with the British wartime propaganda effort. The first set of cards was a series of 140 political cartoons by Dutch cartoonist Louis Raemaekers, with the motto “Lest we forget” on the reverse. But it was the second set that caught my fancy: a series of fifty cards illustrating “Women on War Work.” Each card showed a smiling woman doing a job that women would not have done before the war, including ambulance driver, postal carrier, tram conductor, and furnace stoker. The reverse of each card described the work involved.

A small and engaging illustration (literally) of women’s history.