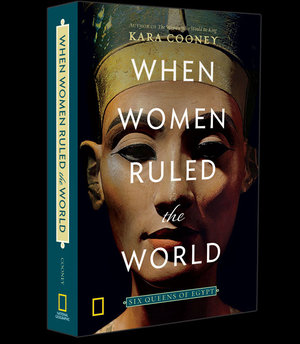 For some reason, I resisted reading Kara Cooney’s When Women Ruled the World: Six Queens of Egypt  the first  seven or eight times it crossed my path. I should have been all over that book. I’d been fascinated by ancient Egypt since I was about nine. Hatshepshut was the subject of the first adult biography I remember reading. But I dug in my heels * Not even Cooney’s engaging episode on the What’s Her Name podcast convinced me to, well, engage.**

I have now seen the light. I recently watched Cooney give a presentation on the material in the book on One Day University *** and started reading the book soon thereafter.****

When Women Ruled the World is a fascinating and accessible read, written in an informal style that in no way detracts from Cooney’s serious academic credentials.

Cooney begins with the question of why women have been and still are excluded from the highest levels of political power. (She points out that some of the most powerful women in American society are erased or forgotten in a very short time. In fact, I am embarrassed to admit that I had to look up one of her examples. None of us are innocent in this regard.)

She moves on to present ancient Egypt as an anomaly, where women were repeatedly called upon to rule in times of crisis. She introduces the reader to six women who ruled—five of them as kings in their own name. (I had only heard of three of them, and only knew that two of the three had ruled.) She traces the political crises that lead to each woman’s rule, and her accomplishments once on the throne. She considered the ways in which their names were (sometimes literally) erased from monuments and king lists by the men that followed them. The memories of those who couldn’t be erased were traduced. (I’m looking at you,  Cleopatra.) And Cooney acknowledges that the same social structures that allowed them to take power, generally as placeholders for a “rightful” male ruler who was unable to rule, limited their authority:  women rulers didn’t follow women rulers.

In short, I don’t know what took me so long. I guess it’s time to check out Cooney’s podcast, Afterlives.

* This is not the first time I’ve avoided a book for reasons that I can’t articulate—and that almost always turn out to be erroneous.

**It is possible that I got so wrapped up in the story she told that I didn’t connect it with the book.

*** A rabbit hole for history buffs and other passionate learners. Be warned.

****In all honesty, even if I had purchased the book the first time I heard about it, there is no guarantee that I would have gotten to it any earlier. Books come in faster than I can read them, as the piles in my office attest.***** I recently whittled my “must read immediately” pile down from 40 to 15—not including books that are research adjacent.

*****I recognize that my sentence construction suggests that I have no agency in acquiring those books. (Books come in. Mistakes were made.) But sometimes it feels like that is, in fact, true. At least that’s my story.

And speaking of women left out of history:

Those of you who are watching THE HARDER THEY FALL  on Netflix may not realize that the character of Cuffee is modeled on that of a real-life woman, Cathay Williams, who disguised herself as a man and enlisted in the United States Army as William Cathay.  I wrote about her in Women Warriors.  You can read her story here:  https://www.beaconbroadside.com/broadside/2021/11/gender-conceal-when-cathay-williams-went-to-war-in-disguise.html