I should make it clear that I never took a class with Dr. Spence and never met him personally. Nonetheless, he played a role in my introduction to Chinese history at the hands of fellow graduate student Rob LaFleur* over the course of several years.

For five years in the late 1980s and early 1990s, Rob and I team-taught three of the four units in a course for the University of Chicago’s continuing education program. The continuing education program was (and is) whimsically called the Compleat Gargoyle; our course was grandly titled Asia and the Middle East. Rob was responsible for material dealing with China, Japan, and Korea. I was responsible for South and Southeast Asia and the Islamic world. It was a survey class writ large: 30 weeks in which to introduce our students, and each other, to boiled down versions of complex cultures and thousands of years of history. (As I remember it, Korea and Southeast Asia got short shrift.)

It was also a graduate seminar of two. On the ride home after each class we had intense discussions about not only the material we had covered in class, but about how to teach, and about questions of historiography, epistemology, R.G. Collingswood’s The Idea of History,* and post-modern theory in various forms.** It was, quite frankly, what graduate school should have been and so often was not.

I don’t know about our students, but I learned a lot. In fact, I would argue that Rob’s intellectual fingerprints are all over anything I have written about China in subsequent years.

Which brings me to three books by Jonathan Spence that Rob assigned at various times and that earned a permanent place on my shelves.**** All three are brilliant, not only in their treatment of specific subjects but as master classes in how to write history that is more than just one dang thing after another.*****

May I suggest for your reading pleasure:  The Death of Woman Wang, Emperor of China: Self-Portrait of Kang-hsi, and The Memory Palace of Matteo Ricci. 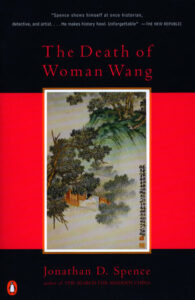 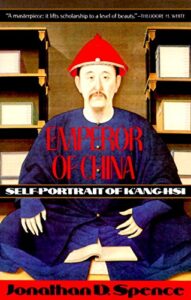 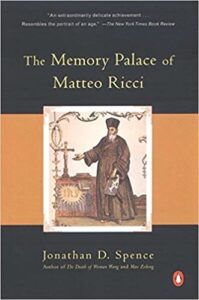 I’m tempted to re-read them myself.

* Now Dr. Robert LaFleur, professor of history and anthropology at Beloit College, and a great teacher. You don’t have to take my word for it. Check out his work on Confucius’s Analects in The Great Courses.

**A formative book for both of us
*** Unavoidable at the University of Chicago at the time
**** I do not say this lightly. I am currently making hard decisions about what books to keep and what books to pitch. This is not procrastination. This is self preservation. My study shelves runneth over, and the piles on the floor are daunting.
*****At first I typed “one dang think after another. “ That is, in fact, what I aspire to as a writer.