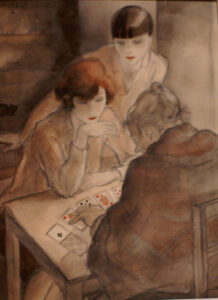 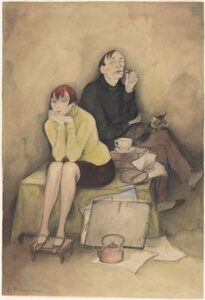 And speaking of the “New Woman,” as I believe we were, allow me to introduce you to German artist and illustrator Jeanne Mammen (1890-1976) whose life and work in the 1920s and 1930s embodied the “Neue Frau” in Berlin.

Mammen was born in Berlin in 1890, but her family moved to Paris when she was 10. She studied art at the Académie Julien in Paris, then at the Académie Royal des Beaux-Arts in Brussels When her family was forced to return to Berlin in 1915 due to the war, she earned her living through her art, creating illustrations for the large number of magazines targeted at female customers.

Much of her work from the interwar years focuses on the lives of women in Berlin.  In her drawings and watercolors in particular, she depicts socialites, members of the demi-monde, and the growing class of white collar workers on Berlin’s streets and in its bars, cafés and theaters. Whether creating caricatures for the satirical magazines that flourished during the Weimar republic or intimate drawings of women’s lives for more general magazines, Mammen combined satire with emotion.

When the Nazis took over in 1933, most of the magazines she worked for were discontinued or bought into the party line. Mammen no longer had a market for her intimate images of women, with their elegant lines and hint of decadence. Unwilling to build a new life in a foreign country for a second time, she refused to flee Germany. She survived by taking small commissions, selling books from a hand cart, and accepted a little help from her friends.