Debby Applegate is a historian and obsessive reader whose first book, The Most Famous Man in America: The Biography of Henry Ward Beecher, won the Pulitzer Prize for biography in 2007 and was a finalist for the Los Angeles Book Prize and the National Book Critics Circle Award for biography, and was named one of the best books of the year by the New York Times Book Review, NPR’s Fresh Air, the Washington Post, Seattle Times, Chicago Tribune, San Francisco Chronicle and American Heritage Magazine.

The Most Famous Man in America was an unconventional portrait of an unconventional minister and antislavery activist whose celebrity rivalled Ralph Waldo Emerson and Abraham Lincoln. With her second book, Madam: The Biography of Polly Adler, Icon of the Jazz Age, she plunged from the world of virtue to the underbelly of vice. It took thirteen years of immersion in the archives to research and write and – to give fair warning to all readers — is much racier than the first.

I’m thrilled to have Debby here on the Margins to answer questions about writing, biography, and Polly Adler.

Take it away, Debby! 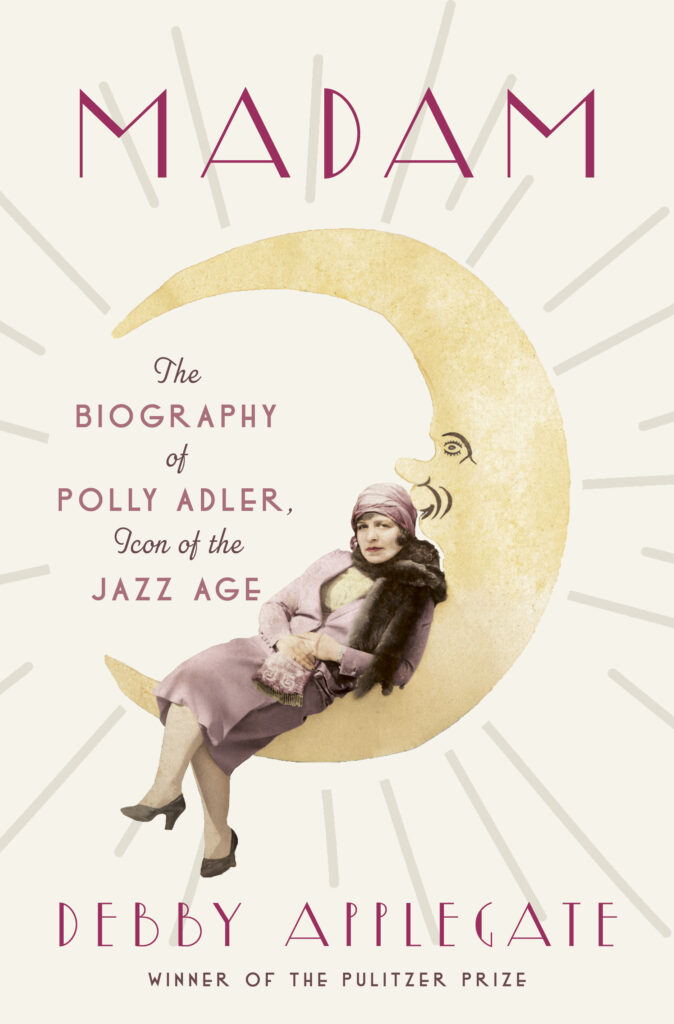 What path led you to Polly Adler? And why do you think it is important to tell her story today?

I discovered Polly Adler by accident when I was strolling through the stacks of the Yale library.  I was looking at books on the 1920s when this slim red volume caught my eye.  This was A House is Not a Home, Polly’s best-selling 1953 memoir of her career as Jazz Age Manhattan’s most infamous and influential madam.  I’d never heard of her before but I was captivated by her autobiography, whitewashed though it obviously was.

I’d always enjoyed reading about the Lost Generation, the Algonquin Roundtable, and the explosion of American culture between the World Wars – but Polly presented these familiar stories from a radically different perspective.  I think of Madam as telling the secret, hidden history of those formative years, revealing how much the glamorous parties and fabulous creativity of the era were intertwined with corruption, hypocrisy, and our darkest moral impulses.

But I didn’t know when I began, how much Polly’s clear-eyed perspective and hard-boiled career would speak to the cultural zeitgeist of 2022. Her story seems especially suited to a moment when we are increasingly interested in exposing the intersections of sex and power and dismantling the conspiracies of silence that protect powerful people from bearing the full cost of their desires. 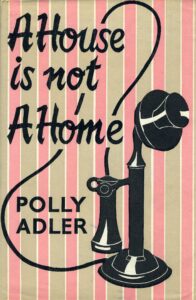 It’s an enormous jump from the subject of your first biography, famous preacher and abolitionist Henry Ward Beecher, to infamous madam Polly Adler.  Are there common threads in their stories that called to you?
If I’d known just how enormous a jump it would be, I’m sure I’d never have dared to take the leap!  It was no small thing to move from would-be saints to unrepentant sinners, from the nineteenth century to the twentieth.
Despite their many differences, however, Polly and Henry share the kind of personality that I like in everyone: open-minded, open-hearted, intellectually curious, clear-eyed but not cynical, ambitious but generous, a wonderful sense of humor about themselves and life in general.  Just as important, they were great cultural connectors, who seemed to pop up in all the hotspots of their time and to know everyone who was anyone.  So, I could use their lives as a way to tell a bigger story about America.

Writing about a historical figure like Polly Adler requires living with her over a period of years.  What was it like to have her as your constant companion?
I really enjoyed her company, just like Henry Ward Beecher.  There were many parts of her story that were dismaying, even disgusting – as the “Queen of the Underworld” she knew more than her share of sociopaths and hypocrites. Writing this book did not improve my opinion of human nature. But Polly herself was always a pleasure to be around.  There was never a dull moment! 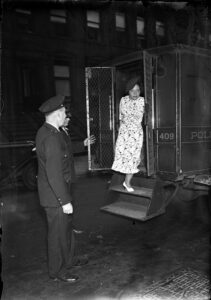 You’ve successfully made the jump that many academics dream of, from writing purely academic work to popular narrative non-fiction based on rock-solid scholarship.  Do you have any advice for readers who dream of doing the same?
My transition from academic writing to popular non-fiction was very rocky at the beginning. I had no idea what I was doing and no idea how much I didn’t know.  In fact, the contract for my first book was terminated when I turned in the initial disastrous chapters.  But I had to repay the advance, which meant reselling the book.  So I set myself on a self-study course to learn how to write for a general audience.  I read books about how to write thrillers and mysteries, and even a very useful essay about to write pornography.

My biggest insight was that creating suspense is the key to persuading regular readers to turn the page.  Readers have to wonder “what happens next?” or “why did that just happen?” I used the practical exercises from these how-to books all the time and I still do when I’m stuck.  I am also a big believer in what I call “reverse outlining”. I take chapters from books or essays I admire and outline them paragraph by paragraph – not the content, but the action of the paragraphs (i.e. paragraph 1 introduces the main character; paragraph 2 describes their backstory; paragraph 3 introduces their desire or goal; paragraph 4 introduces a conflict or thwarting of that goal, etc.).  This makes it easier to see the structure or scaffolding that creates the effect I admire.

However, it is trite but true: the grass is always greener on the other side of the fence.  Many times I’ve wished that I could just lay out my findings for fellow scholars, without having to kowtow to regular readers who aren’t as fascinated by every tiny detail or complex historical argument the way I am.

Your books are praised for reading like novels. Do you consciously use novelist’s tools in writing narrative history?
Indeed, I do. What I like about a good history book, or any kind of book, is the feeling of immersion in that imaginative world.  What does is it like to swim in another atmosphere, steeped in foreign ways of thinking?  So, whenever possible I try to convey the action through actual or implied points of view, constructing a scene as it would be experienced through an individual’s sensibility rather than by an omniscient narrator. I try to let the characters make the interpretive points, rather than me, and let the characters, in effect, argue among themselves as to whose interpretation the reader should believe. Pungent quotes help with that. But I’m also fond of the novelistic technique of “free indirect discourse” where you as narrator subtly employ the language of the characters and their milieu as your own, as a way to move in and out of various positions.

Frankly, I’ll use any means to make a scene come alive in a reader’s head, as long as there is a factual foundation for it.  Sometimes that requires a little sleight of hand – and the judicious use of the passive voice and implication over declaration — but I am scrupulous about making certain that what I’ve written is true to the best of my knowledge.  That’s the historian’s chosen game, after all.

One of the questions I’m fascinated with right now is how biographers name their subjects, particularly when writing about a woman. Did you chose to use Polly, Adler, or something else in your book and why?
With my first book, about the Reverend Henry Ward Beecher, I had to use the name “Henry” to distinguish him from all the other “Beechers” in the main cast of characters. But really that was just my excuse. I spend so much intimate time with my characters that I am always inclined to call them by their first names.  Any reader who is going plow through a long biography wants to feel that sort of intimacy with the subject, I think.  However, I am very careful to make sure that I dole out first names on an equal basis, so that even the highest and mightiest of men are treated as domestic creatures.

There is meaning in the way a person’s name can evolve over the course of a lifetime – from childhood endearments to nicknames to official titles — and you miss all those nuances when you depend only on a last name.

I recently re-read Zelda, Nancy Milford’s 1970 biography of Zelda Fitzgerald, a book that had a huge impact on my thinking when I was a freshman in high school. It was only on rereading it now, as a historian and a grown-up, that I realized how revolutionary it was in 1970 to write a fully fleshed biography of a woman, especially one who’d been written off as merely “the  wife of an important artist.”  It’s a great feminist book, yet it reads like a heartbreaking novel.

What do you find most challenging or most exciting about researching historical women?
I loved researching women of the underworld and the demimonde because they are so unconventional in the evidence they leave behind.  Women who aren’t terrified about compromising their “respectable” status are much candid and surprising in what they reveal. They boldly defy the historical stereotypes that lodge in our heads, even when we know better.  Also, counterintuitively, wayward women (as they used to be called) often leave behind more traces than the average, respectable woman who keeps her nose clean and her private life private.  Their tangles with law enforcers, moral reformers, and muckraking reporters leave a surprisingly rich record.  The down side is that they don’t leave a lot of diaries and letters.  (Then again, who writes diaries and letters anymore?)

Do you think Women’s History Month is important and why?
Absolutely! Annual celebrations like Women’s History Month are not just about consciousness-raising or turning on a spotlight — although that is no small thing. They function a little like regular rituals or religious holidays, connecting us to our values and our past, all those things that are so often forgotten in the hubbub of daily life.

What are you working on now?
Absolutely nothing! I do feel a little guilty about that. If someone asks me to write something or contribute my modest might, I’ll happily say yes.  But after spending thirteen years on Polly Adler, the idea of initiating a new project to take over my life…well, I’d have to be crazy to do that again, wouldn’t I?

Come back tomorrow for a post on “lady coders’ from regular History in the Margins reader and occasional guest poster, Jack French.