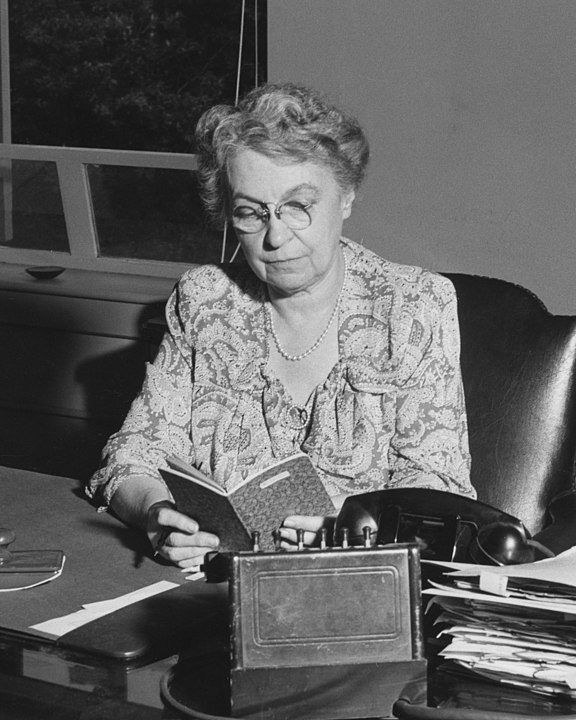 Every formal communication or article about Ruth B. Shipley, whether written by journalists during her lifetime or by scholars in the decades since her death, refers to her as Mrs. Ruth Shipley. She was formidable. She was powerful. And in the end, she was controversial. In 1951, Time magazine described her as “the most invulnerable, the most unfireable, most feared and most admired woman in Government.” And yet, she is largely forgotten today.*

Mrs. Shipley* was the Chief of the State Department’s Passport Division for 27 years, from 1928 to 1955. She did not simply run the department—she personally approved and disapproved passport applications, often based on her own sense of whether an applicant would, as Reader’s Digest described it “be a hazard to Uncle Sam’s security or create prejudice against the United Stats by unbecoming conduct.” As a result, many Americans whose names we do remember corresponded with her about their travel plans.

Shipley took her duties seriously. In 1933, she led a successful campaign to prevent a magazine from using the word “passport” in a advertising campaign for its promotional literature. She believed such use “cheapened…the high plane to which a passport has been raised.*** In 1937, she changed Passport Division policy and began issuing passports in a married woman’s name without caveat,  if the woman requested it. Previously married women’s passports were issued with her name followed by the phrase “wife of”.****

The functioning of the Passport Division was affected by larger issues of American politics. The Neutrality Acts of the 1930s restricted the ability of American citizens to do business abroad, and Shipley’s office became responsible for monitoring Americans’ international travel. A duty she exercised with a heavy hand and a lack of imagination regarding the consequence of some of her decisions. Since her decisions were not subject to judicial review, they were difficult to overturn, particularly since she did not offer reasons for the denial of any particular passport. (When she insisted on including the phrase “ on Official Business” on the passports of OSS agents, effectively “outing” them to enemy governments, the agency’s head, “Will Bill” Donovan, had to go all the way to President Roosevelt to get the decision reversed. )

Shipley’s single-handed control over the passport process put her in the center of political controversy at the height of McCarthyism and the Red Scare.  In 1950, Shipley helped draft legislation that made it illegal for members of communist organizations to hold an American passport. As a staunch anti-Communist, she used the power of her office to restrict the travel of left-leaning Americans whether they were avowed Communists or not. Critics claimed, with some validity, that she was denying passports on arbitrary and personal political grounds. Her supporters defended her actions as important in the fight against Communism.

In 1955, Mrs. Shipley reached the mandatory retirement age of 70. Secretary of State John Foster Dulles, a Cold Warrior of some note, asked her to continue in her post, but she chose to retire, perhaps because the power of her position was being dismantled through a series of judicial decisions that required the passport division to implement due process procedures and a review system.

*In all fairness, many equally powerful male civil servants are also forgotten today outside of specialist circles. It is easy to forget how easily we forget.
**I see no reason to change the convention
***Obviously a short-term victory. I wonder what she would think of, say, the National Park System’s passport program.
****The impact of marriage on not only passport status but even citizenship prior to the 1930s is a complicated and infuriating subject. The fundamental idea was that a woman’s citizenship was tied first to that of her father and then to that of her husband. Don’t get me started.

A couple of notes about the blog:

1.  Those of you who subscribe to the blog may have noticed that it disappeared for several weeks.  (At least, I hope you missed me.) Apparently my used of a diacritical marker in a Slavic place name in an earlier post The Free State of Fiume upset the subscription software.  I kept writing posts, but they weren’t going out by email.  And it took me a while to notice.  It’s been fixed.  This post should go out in an orderly way.  And the new system will include links to the last few posts so it will be easy to catch up with any you missed.

2.  I am deep in the first “real” draft of my latest book. And I’ve got to admit, it’s going slowly.  My manuscript is due May 1, 2023, which feels like tomorrow as far as I’m concerned.  I love writing these blog posts, but for the foreseeable future I’m going to cut back to one post a week.