Recently a fascinating story about a real life woman warrior appeared in the Wall Street Journal. To summarize the story: Ukranian-born Olha Tverdokhlibova fought against the Germans in World War Two. She was a skilled markswoman, served as a scout behind German lines, fought her way to Berlin with the Red Army, and was highly decorated for her service, When Putin invaded Ukraine in February, she called the Ukrainian recruiting office and offered her sharpshooting skills. To quote the WSJ article: The recruiter sounded enthusiastic, Ms. Tverdokhlibova recalled, until she revealed her age: 98.” It’s worth tracking down the article if you want more details about her story, and about her response to the Russian invasion.* 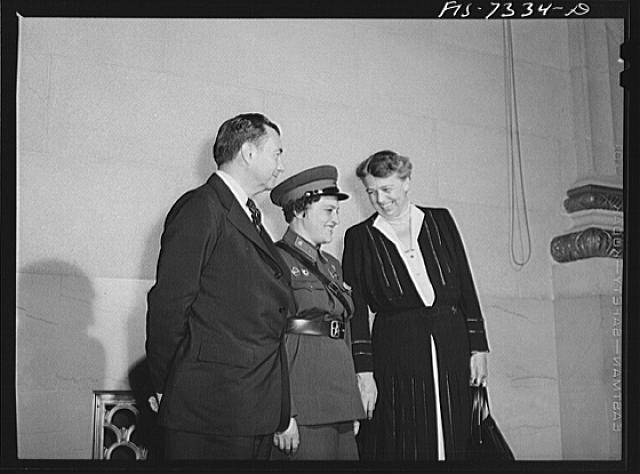 Lyudmilla Pavlichenko was one of the most successful snipers in World War II, with 309 confirmed kills. (Almost 50 percent more than the acclaimed Audie Murphy.)

Tverdokhlibova was one of 800,000 women who served as soldiers in the Red Army in the Second World War. Most, like enlisted women in the United States or Britain, worked in support positions, but several hundred thousand fought at the front as snipers, machine gunners, tank crews, antiaircraft personnel,** and three regiments of female bombers, fighter pilots, and airplane mechanics. Between 100,000 and 150,000 Soviet women were decorated for bravery during the war. Ninety-one women were awarded the Gold Star Hero of the Soviet Union, their nation’s highest military honor. *** More than half of them received the honor posthumously.

* James Marson. “Red Army Veteran Turns Against Putin.” May 10, 2022. P. A7. The WSJ has a serious paywall, so this link will only help if you have a subscription, or access to one: https://www.wsj.com/articles/she-was-a-soldier-in-the-red-army-now-shes-a-torch-bearer-for-ukraine-11652119269  (It’s worth clicking the link even without a subscription, just to see her picture.) My personal access to the paper comes through the My Own True Love Clipping Service, a very efficient operation that delivers articles of interest to my place at the dining room table.

**One German pilot testified to the effectiveness of women in Russian antiaircraft units: “I would rather fly ten times over the skies of Tobruk [over all male British ack-ack] than to pass once through [Russia where] the fire of Russian flak [was] sent up by female gunners.”

***In a breathtakingly explicit act of erasing women from history, after the war the Soviet government instructed its squadrons of female fighter pilots not to speak of their wartime experiences.