These days I am deep in the history of the years between the two world wars. Some of it was familiar at the point that I began, at least in broad outlines. But the fact of the matter is that a whole lot of history happened across Europe in those twenty-one years that never popped up in my historical studies, formal or otherwise.* Some of those stories are inherently small. (*Coughs: Free State of Fiume. *) Others, like the story I’m going to share today, are not so small. I’ll share as many of them as I can here over the coming months. Taken as a whole they create a much richer picture of just how unsettled Europe was between 1918 and 1939. ** 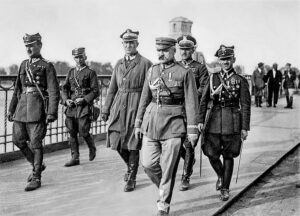 At the end of World War I, the Republic of Poland was established as an independent country after more than a century of being divided at various times and various ways between France, the Austro-Hungarian Empire, Prussia, and the Russian Empire.  Independence was not all beer and sausages. Under the leadership of nationalist hero Jozef Pilsudski,*** the new country was faced with a ravaged economy, extensive war damage, border conflicts with the Russian Red Army and a political blank slate.

In 1921, Poland adopted a constitution modeled on that of the French Third Republic, with a president and a two house legislature.  Like its contemporary, the new Weimar Republic, the Republic of Poland was unstable, with supporters of a democratic republic challenged by the nationalist and antisemitic National Democracy party. The country’s first president was assassinated by a supporter of the National Democracy party only five days after taking office. Pilsudski helped stablise the country through a second set of elections, and then retired from active politics. What he did behind the scenes was another story.

By 1925, public unrest was increasing thanks to the government’s inability to solve problems of hyperinflation and mounting unemployment. At the same time, some terms of the  recently signed Locarno Treaties appeared to threaten Poland’s independence, or at least leave it without allies in the face of potential German aggression. Pilsudski became increasingly critical of the elected government and eventually issued statements demanding the elected cabinet’s resignation.

On May 12, 1926, Pilsudski marched on Warsaw at the head of several units of the Polish army. His forces captured bridges over the Vistula River, effectively isolating the city, and demanded the resignation of the cabinet. After three days of urban fighting, the president and prime minister resigned in order to keep the coup from escalating into a full-scale civil war.  A new government was formed in early June, with two of Pulsudski’s cronies as president and prime minister.  Pilsudski refused to form a government in his own name, taking the position of minister of defense instead. In fact, he was the most influential politician in Poland until his death in 1935 and did his best to protect his country against a German invasion.

There are echoes in this story of things that were happening in Germany, in Italy, in Fiume. No wonder Sigrid Schultz and her comrades regularly reported that there were rumors that war was in the air.

*While there are plenty of holes in my historical education that I find shocking, that’s not what I’m talking about here. The simple fact is that the more you learn about history, (or anything else for that matter), the more you realize you don’t know.
**There will still be holes, because that is the nature of the beast.
***There should be several diacritical markers in his name, but the last time I tried to be correct about Slavic language markers the software that sends blog posts to email subscribers went on strike.****
****You didn’t know you could subscribe? There are subscription blocks for both this blog and my bi-weekly newsletter at the top of the sidebar if you read this on a computer. I haven’t figured out to make them work on a telephone yet.