To recap: a small local history museum in Hannibal, Missouri, introduced me to Hannibal-born celebrities who weren’t Mark Twain. Two were totally new to me. One I knew. Or at least I thought I did. 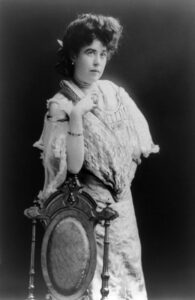 Margaret Tobin Brown was born in Hannibal, Missouri to poor Irish-immigrant parents in 1867.* And after that, it turns out that almost everything I “knew” about her was wrong.** She wasn’t even called Molly in her lifetime. Her friends called her Maggie.

Instead trying to tell her real story, I’m going to send you an episode of the What’s Her Name podcast, in which two of my favorite women’s history people talk to Jamie Melissa Wilms of the Molly Brown House Museum in Denver.  Believe me, it’s a doozy.

*The three-room cottage where the Tobin family lived is now a museum, which we didn’t even try to visit. ( Like many visitors in Hannibal, we wore ourselves out on Mark Twain. ) Her much grander home in Denver, where she lived after the Brown mining interests made them wealthy, is also a museum. I’m putting it on the list.

**Which is something of a relief because I never liked the musical that claimed to be based on her life.