Etta Madden, who is also an American in Italy whenever possible

Etta Madden is Professor of English at Missouri State University and the author of Engaging Italy: American Women’s Utopian Visions and Transnational Networks (SUNY Press), Eating in Eden: Food and American Utopias (U Nebraska Press) and Bodies of Life: Shaker Literature and Literacies (Greenwood). She has also published numerous articles on American literature and intentional, spiritual communities in the US and in Italy.

In addition to receiving a Fulbright award, she has been a research fellow at the New York Public Library and is a two-time recipient of Mellon fellowships from the Library Company of Philadelphia.

Take it away, Etta! 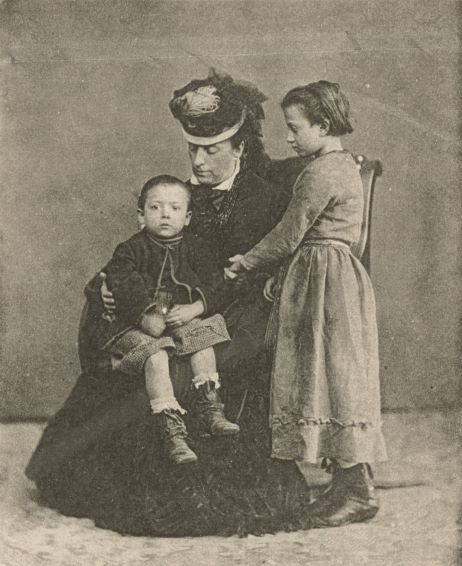 Not all women warriors fight with swords and spears. Emily Bliss Gould, a US expat in Italy, waged warfare with her pen. She picked her battles carefully, and she engaged clever rhetorical tactics.

Gould went abroad in 1860 with her husband, retired US Naval physician James Gould. The story is that they went to Italy for her health, but his retirement followed leadership changes and likely factored into their decision. He soon became the recommended physician for US expats in Rome, according to travel guides such as John Murray’s A Handbook of Rome and its Environs (1867). Emily was not merely a trailing spouse when she went abroad in her mid-thirties She found a cause to fight for when she first witnessed schools in Italy’s Piedmont region. The work of the Waldensians—non-Roman Catholic Christians whose history predated Martin Luther—impressed her. The Waldensian schools in rural mountain villages around Turin served impoverished children, and Gould (like many others) believed education would benefit them dramatically. She wanted to see more of such good work.

In 1867 Gould picked up her pen to join the forces for better education. She wrote in December from Florence, Italy, in the dining room of the US Ambassador, George Perkins Marsh and his wife Caroline. Her chosen battle? Finding funds to support the Florence Evangelical School, “a school of some 200 or 300 children.” She wrote to Dr. Thompson, President of the American Foreign and Christian Union, begging with all the metaphors she could muster. Gould employed the language of agriculture rather than warfare, plowshares rather than swords. “We must educate future regeneration of the land,” she wrote. By land, she meant the people, instead of the peninsula’s depleted soil. The children possessed promise. And because Florence was “now open to religious and intellectual improvement,” she wrote, US citizens might help.

In 1870, and with the funds she had raised, Gould had moved south to Rome. There she established what became known as the Italo-American Schools. These provided housing and were orphanages as well as industrial schools—that is, schools that taught hands-on skills rather than classical literature. All the students learned basic literacy and math, but additionally, the boys learned typesetting and printing, while the girls learned needlework. (Gould did not have a problem with this gender division). Like many privately-funded schools, the education also included some pointed messages regarding political and religious beliefs. Children learned patriotic songs and bible stories. But Gould’s overall stated purpose with the school efforts were, along with literacy, skills that might help young people earn a living–what today is called “workforce development.” As she explained, it was “to christianize and civilize, not to propagandize.” Not surprising, what she hoped would be unifying work for the good of all was divisive.

One, to be expected, was with Roman Catholics who saw Gould’s work as threatening. But more significant, as her successes grew, Gould realized a few non-Catholic men were trying to wrest control from her. This new warfare with words erupted in Gould’s private letters, rather than on any public stage. She expressed her frustration to Ambassador Marsh that one Italian male leader misspent funds—he needed to learn the ABCs of finance. And in another, she wrote that a certain church leader wanted to oversee not only the organization but also—surprise, surprise!–all the funds she raised for it, by putting it “under the charge of” the American Sunday School Union. Her fiery words about this individual (beyond the scope of this blog post), elicited a strong response from the Ambassador. Marsh, in agreement, referred to this “altar man” as an “ass.” Marsh seems to have been an ally, but there is no evidence that he fought on her side. We can only imagine that his words and their ongoing correspondence indicate at least emotional support.

What we do know is that as Gould’s work continued, her voice in the annual reports and fundraising letters grew stronger. Initially, her words were subsumed by the male board of directors. Gradually, her name and words appeared less-obliquely within the reports. In fact, in the last report before her death in 1875, Gould wrote directly with an appeal to readers, even signing her name as “Directress of the Italo-American Home and Schools.” This culminating publication included a portrait—albeit not of Gould dressed in armor and on a horse ready for battle but rather posed as a gentle mother figure. She holds in her lap two Venetian children, Marietta and Bepino Bartoli. This public posture counterbalanced her private aggressiveness.

The other private battles with “Mrs. Gould’s Works and Wants” (as one annual report of the Italo-American Schools was subtitled) engaged Waldensians. These insiders to the language and culture, also experienced with running schools, had helped her mission; she had collaborated with them for several years. Communications with Matteo Prochet, longstanding President of the Evangelism Committee and linguistically adept (he knew multiple languages and traveled throughout Europe and to the US) indicates that Waldensian leaders wrestled with Gould over teacher placement and school management. Then, as now, finding and keeping teachers could pose a challenge. Yet the letters also suggest, as those between Gould and Marsh did, that the battle involved power dynamics. Who exactly was in charge of this fight for education in Italy?

Some might say that both Gould and the Waldensians triumphed—a win-win situation. Following her early death in 1875, Gould’s husband handed her work over to the Waldensians. Yet testimonies left in articles such as one published in L’Italia Evangelica (1881), or in her biography, A Life Worth Living (1879), by Leonard Woolsey Bacon, celebrate Gould’s mission and vision. Visitors to Florence may see Gould’s name on the wall of the Waldenisan guest house in the Oltrarno neighborhood. And an institution bearing her name—still helping children—remains in Florence today and under Waldensian direction.

Want to know more about Emily Bliss Gould? She is one of the three women featured in Engaging Italy: American Women’s Utopian Visions and Transnational Networks (SUNY Press 2022). (You can get a 30%  off sale coupon for the paperback edition, which will be released on October 1, on Etta’s  website, ettamadden.com.

For more insights to American women writers abroad and, specifically, about Italy, subscribe to Etta’s monthly newsletter, All Things Italy through the website.

Want to schedule a talk? Feel free to reach out through email or social media: Ettammadden@gmail.com