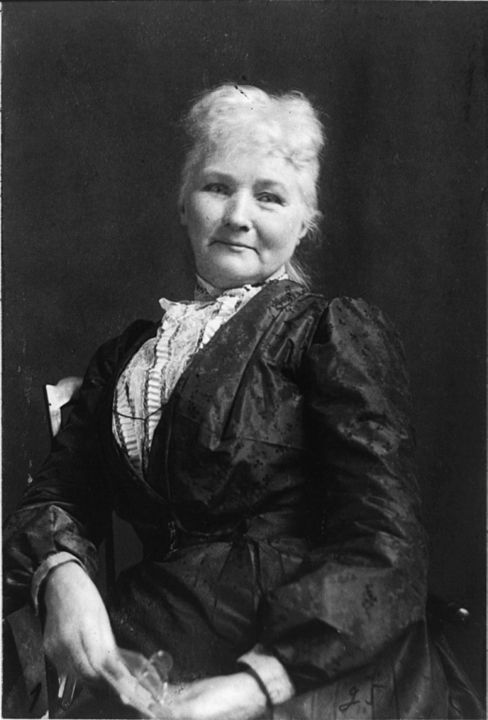 Driving from Chicago to the Missouri Ozarks and back over the last years,(1) I have passed the sign for the Mother Jones monument many, many times. It is a plain, almost amateurish, sign, without the official imprimatur(2) of a brown tourist attraction sign(3) or the flash of billboard advertising a show in Branson. Nothing about it is designed to lure a curious history bugg off the highway. And up to now, we have not been lured.

That changed this year, thanks to an information panel in an Illinois highway rest stop.(4) My Own True Love and I were hooked.

I had been vaguely aware that Mother Jones was a union organizer, but I had no idea how important she was at her time.

Mother Jones was in some ways the Grandma Moses of union organizers: in fact, when she was testifying before a committee in the Senate on labor issues, a senator mocked her as the “grandmother of all agitators.” (She replied that she would someday like to be called the “great-grandmother of all agitators.”) At the point that she began her career as a union organizers, Mary Harris Jones was a poor, widowed, Irish immigrant. She had had survived the potato famine, the loss of her husband an four children in a yellow fever epidemic, and the Chicago fire,which destroyed her successful dressmaking shop.

After each loss, she reinvented herself. In the 1890s, she reinvented herself one more time, as “Mother Jones.” The name was subversive: playing against and with nineteenth century domestic stereotypes of women. Mary Jones cast herself as the mother of oppressed people everywhere. At a time when women were “supposed” to be quiet and stay home,(5) Mother Jones was a street orator with no fixed address, who traveled the United States for twenty-five years, moving from cause to cause. She had no interest in being “ladylike.” As she told a group of women in New York: “Never mind in you are not lady-like, you are woman-like. God Almighty made the woman and the Rockefeller gang of thieves made the ladies.”

Jones rose to prominence as an organizer for the United Mine workers, who paid her a stipend, but she went wherever she felt she was needed. She worked with striking garment workers in Chicago, bottle washers in Milwaukee breweries, Pittsburgh steelworkers, and El Paso streetcar operators, helping them fight against 12-hour days, low wages, dangerous working conditions, and the financial servitude of company housing and the company store.

Her motto was “Pray for the dead, and fight like hell for the living”—the world would be a better place if we all adopted it as our own.

When we got to the monument in Mt. Olive, Illinois, we learned there is a second part to the story. Illinois became a battleground for labor rights in 1898, when the Chicago Virden Coal Company challenged the miners’ contract. They brought in a train loaded with strikebreakers and armed guards to back them Miners from across the state joined together to stand their ground against the company. In the violent encounter that became known as the Battle of Virden or the Virden Massacre, thirteen people were killed, including six guards and seven miners. Thirty miners were wounded. Mother Jones considered the battle the birthplace of rank-and-file unionism.

A Mt Olive church refused to allow the miners to be buried in their churchyard, fearing their graves would become a pilgrimage site for the labor movement. (This is what as is known as a self-fulfilling prophecy.) In response, the United Mine Workers built the Union Miners Cemetery in Mt. Olive, which in fact became a pilgrimage site after Mother Jones, at her request, was buried there in 1930. Personally, the union buttons that had been left at the foot of the monument choked me up.) 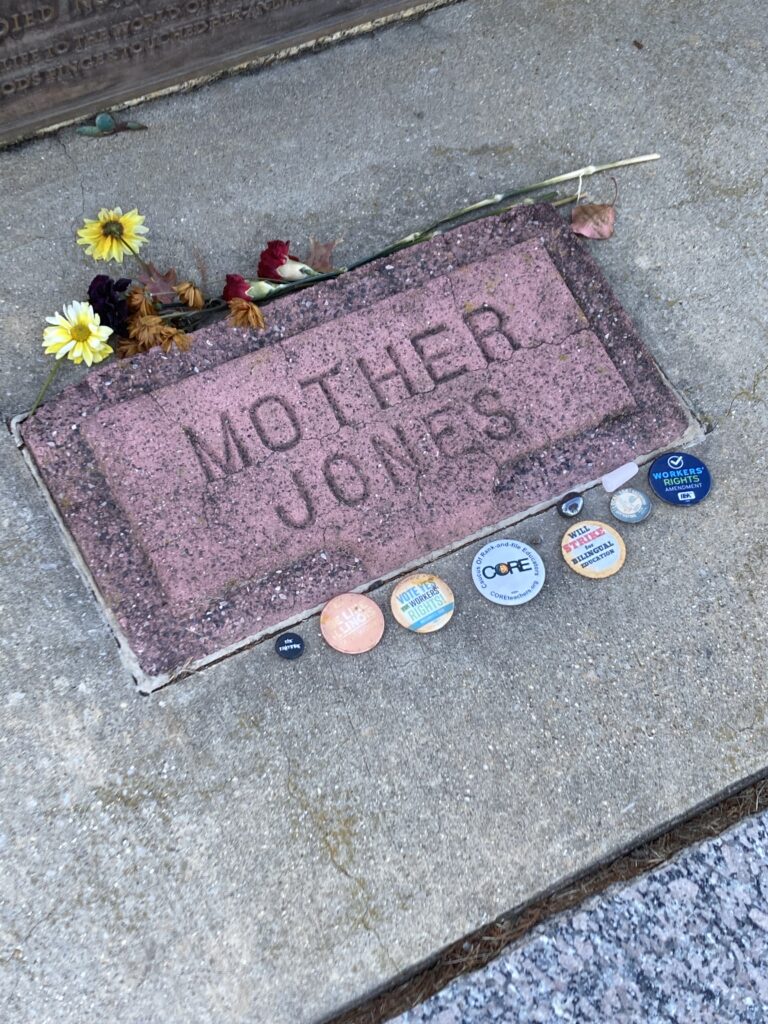 (1) And by years, I mean decades
(2)Is there such a thing as an unofficial imprimatur?
(3) I went down a small rabbit hole trying to discover who approves such signs. I didn’t get an answer, but I did learn that the signs originated in France.
(4) We’re seeing more and more historical markers at highway rest stops, and I for one would like to say “bravo!” Not only because I love a historical marker, but because it encourages the curious to spend more time at the rest stop. After all, the point of the stop is not just to use the restroom, but to stretch the legs, rest the eyes, and fluff the brain, thereby making the next stretch of driving a little safer.
(5) Or so the popular account of history tells us. If I have learned anything in writing this blog, it is that the ideal of the “angel of the household” applied only to members of the relatively prosperous middle-class and that even within that class many women didn’t fit that mold for many reasons. Just yesterday a friend sent me the story of the team of “gentlewomen who had experienced reverses” who created the restaurants in Marshall Field’s in downtown Chicago. A very different story than that of Mother Jones, but one that also stands outside what we are taught was the nineteenth century norm.