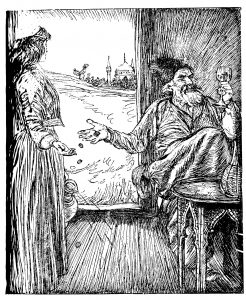 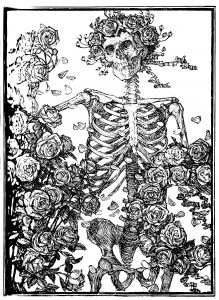 Edward Fitzgerald’s translation of The Rubaiyat of Omar Khayyam is one of those books that some scholars love to be snotty about. Literary critics of a certain stamp dismiss it as bad poetry, apparently on the grounds that people love it who don’t otherwise read poetry.* Persian linguists rightly point out that Fitzgerald’s translation really isn’t a translation so much as a re-imagining–a complaint that seems to miss the point. Me, I’m a long-term fan.

But while I’ve always been fascinated by the idea of the mathematician-poet,** I hadn’t given two thoughts to Edward Fitzgerald until I picked up Robert D. Richardson’s Nearer the Heart’s Desire, a dual biography of the eleventh-century Persian polymath and the nineteen-century British literary dabbler whose lives are inextricably bound together in a single poetic work.

The book is divided into two unequal and fundamentally different sections. The first third of the book is as much a portrait of Seljuq Persia as of Khayyam himself. Richardson untangles the myths that have grown up around the historical Khayyam and places him firmly in the world of the Seljuq court, with its political struggles, religious controversies, and scientific curiosity. In the second section of the book, Richardson introduces Edward Fitzgerald, the “bohemian scholar-gypsy masquerading as a Victorian gentleman” whose loose translation of Khayyam’s ruba’i*** ensured the earlier poet’s fame centuries after his lifetime.

In both sections, Richardson focuses on the relationship between poet and poetry. He considers the ruba’i as a verse form and the contested authorship of Khayyam’s poetry. He describes Fitzgerald’s unconventional and sometimes heavy-handed editorial process of abridgement, re-arrangement, and revision. And he celebrates the successful marriage of the two in Fitzgerald’s The Rubaiyat of Omar Khayyam, “the quiet thunderbolt of a translation that is also a poetic masterpiece.”

Richardson does a fine job of bringing the two poets to life for a modern audience for whom they are probably unfamiliar, but Nearer the Heart’s Desire is ultimately a biography not of the poets but of their shared poetry.

*Since its original publication in 1859, Fitzgerald’s version of the Rubaiyat has been translated into at least fifty-four languages and appeared in more than 1300 editions.

**Lewis Carroll, another favorite of mine, also falls into this category. Anyone else come to mind?

***It’s a poetic form with rules. Like a sonnet. Or maybe a limerick.

Much of this review previously appeared in Shelf Awareness for Readers. Among other changes, I have re-inserted Oxford commas.