I first “met” Adrienne Mayor on the late lamented group history blog Wonders & Marvels, which both of us contributed to on a regular basis.  I always looked forward to Adrienne’s posts. She wrote about quirky and fascinating topics that straddled the worlds of classical history and history of science: biological warfare in the ancient world, the history of fossil hunters, Aristotle and physiognomy. Over time, she began to share posts about women warriors in the ancient world, hints of what would become The Amazons: Lives and Legends of Warrior Women Across the Ancient World.

Mayor is a research scholar in Classics and History of Science, and a 2018-19 Berggruen Fellow, Center for Advanced Study in the Behavioral Sciences, Stanford University. In addition to The Amazons, she is the author of The Poison King: Mithradates, Rome’s Deadliest Enemy , which was a nonfiction finalist for the National Book Award in 2010, and the recently released Gods and Robots: Myths, Machines, and Ancient Dreams of Technology.  Her books have been translated into a dozen languages and her work is featured on NPR, BBC, History and Smithsonian Channels, New York Times, National Geographic, and other media.

I’m so pleased to have her here for Three Questions and an Answer. 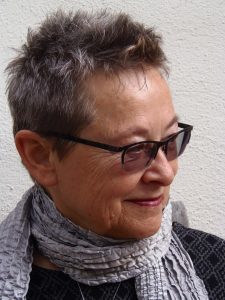 What was the most surprising thing you’ve found doing historical research for your work?
One of the most unexpected things that I discovered in researching The Amazons was the survival of so many names of ancient warrior women from myth, legend, historical accounts, and vase painting inscriptions. I had no idea that so many names of Amazons and Amazon-like women from Greek, Italian, Persian, Egyptian, Caucasian, Eurasian, Central Asian, and Chinese sources had been preserved for over two millennia–more than 200! I devoted an Appendix to listing every name I could turn up, along with the translations. I think this amazing persistence of warrior women’s names is evidence not only of the great popularity of Amazon tales in antiquity, but it also gives us an idea of how many hundreds of stories about bold, fighting women once circulated but are now sadly lost. And who knows, maybe we’ll see a new generation of baby girls with venerable Amazon names!

You end The Amazons with a section on ancient women warriors outside the Greek world.  How did you handle the special challenges of researching women outside your area of expertise?

The Amazons Part 4 has four chapters on stories and evidence for warrior women outside the Greco-Roman world, from the Caucasus, Persia, Egypt, North Africa and Arabia across the Central Asian Steppes to India and China. My research into that material only brings the tip of the iceberg to light and that there are many more tales to be told about warlike-women beyond the ancient Mediterranean world. Some of the stories that I recount had only recently been translated from oral traditions. I depended on the expertise of other scholars and benefited from suggestions and information from a great many historians, linguists, anthropologists, archaeologists, and other specialists to bring some of those non-Greek women warriors to light. I’m so grateful to all who shared their knowledge.

You have served as a consultant for a number of film and documentaries.  What do you see as the role of film in introducing history to a popular audience?
I think of mythology as a kind of treasury of “cultural dreams” from antiquity and I see movies and TV series as another form of cultural dreams of our own time, often drawing on the past. So I believe that popular film and TV–whether mythic fantasies, historical fictions, or documentary re-creations–can be compelling ways of keeping history alive, bringing historical events and figures to life to new audiences, and encouraging people to learn more. I know that Wonder Woman 2017, especially the first third of the movie depicting a åmarvelous array of Amazons as they trained for battle, led many viewers both male and female, to seek out the real history of warrior women in antiquity. Black Panther’s audacious Dora Milaje “Amazons” (2018) encouraged fans to learn about the female soldiers of Dahomey and warrior queens of Africa. I think film is an excellent gateway to instilling a love of history.

Turning the tables, Adrienne asked me: Your new book Women Warriors describes women at war from antiquity to the present from all around the world. It must have been difficult to decide which individuals to include. Can you tell us about your selection process?

Process may be too grand a word to describe how I chose who to include and who to exclude.

I started collecting stories about women warriors in a casual way in the early 1980s. By the time I was ready to write this book, I had collected references to several hundred women. That number grew to several thousand as I worked on the project. Obviously I had to make some hard choices. These were the main criteria that I worked with:

(Occasionally I fudged on the first two criteria when it was necessary to make a point.)

After that it was a question of how the stories fit together in each section—a process that is more art than science. 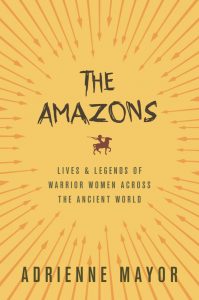 Want to know more about Adrienne Mayor and her work?

(Come back tomorrow for another Telling Women’s History Interview.  I’ve got an entire month of some of my favorite history people talking about the work they do and how they do it.  Next up:  Jason Porath, creator of Rejected Princesses.)