In my last blog post, I made this off-hand comment: “If you’re looking for a pop culture book on the history of fashion, Ottoman Dress and Design in the West is not your book.”  Several of you contacted me to ask what I would recommend for those of you who were interested in such a book.

If this was an attempt to Stump the Historian, you have failed. 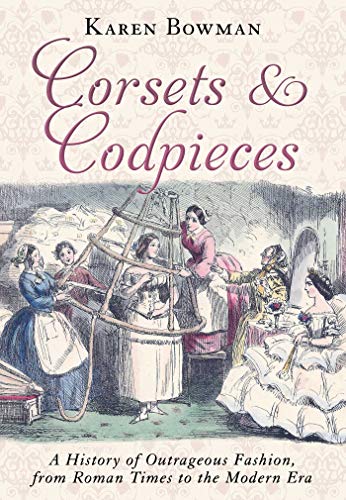 After a brief search through my shelves, I offer you Karen Bowman’s Corsets and Codpieces: A History of Outrageous Fashion, from Roman Times to The Modern Era. As its title would suggest, Corsets & Codpieces is at first glance a light romp through the history of fashion in the West. (1) But while the tone is light, the work is solidly grounded in the social context for sartorial change. It also offers asides on topics such as the conditions under which lacemakers worked (2), the advantages of wigs over your own hair in the days of Really Big Hair (3), 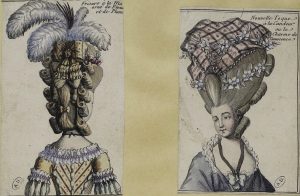 and how to sit in a farthingale. My own favorite is an endnote explaining the ubiquitous little bow on modern bras. I’m not going to share the details, but it turns out to be the fashion equivalent of a vestigial tail.

Looked at as a whole, the book illustrates a fascinating point made in Ottoman Dress and Design in the West: that the idea of fashion is based on fairly rapid changes in style and requires an economy in which a substantial portion of the population can afford (or feel compelled) to buy goods they don’t actually need.  Guilty as charged.

(1)How can you resist a chapter titled “Death by Crinoline”?
(2) Bad
(3) Among other things, the eighteenth century version of “product” attracted bugs and rodents. Eeuw!